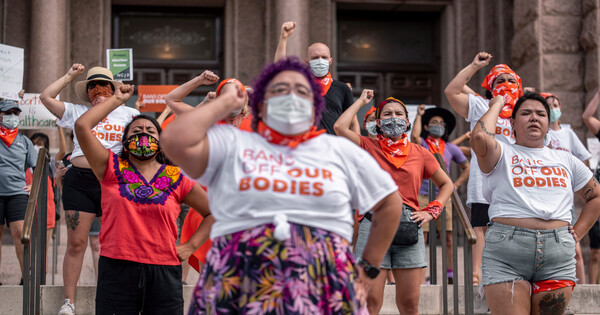 Abortions are basically illegal in Texas as of this week. On Wednesday at midnight, the state legislature’s Senate Bill 8, also called SB8 or “the heartbeat bill,” went into effect, prohibiting all abortions after six weeks—in other words, before many people even know that they are pregnant. (Some 85 to 90 percent of abortion procedures in the state are done after  the sixth week of pregnancy.) Though there have been multiple legal challenges to the bill since Governor Gregg Abbott signed it into law this past May, it was the Supreme Court’s choice to clear the path for SB8 to go into effect. On Monday, abortion providers filed an emergency request to the Court to block the law, but the Court declined to take any action to stop the ban, instead opting to issue an unsigned order to uphold it literally under cover of darkness.

The SCOTUS decision essentially spits on 50 years of constitutional precedent protecting abortion access. For the Texas Republicans who masterminded the ban, the chaos around it has certainly fulfilled their goal of jeopardizing and eliminating abortion access in the state. State legislators wrote it with court challenges in mind, creating a procedurally thorny problem: Enforcement of the ban lands on private citizens—literally anyone in the state—and not with state officials. There is effectively a bounty on the head of any Texan seeking an abortion after six weeks of pregnancy: Under SB8, an individual can sue abortion providers, counselors, or anyone else who helps facilitate an abortion (including, say, a relative, friend, or Uber driver driving a patient to a clinic) and receive as much as $10,000 as a reward. Anti-abortion extremists have long felt both entitled and emboldened to police the reproductive choices of others—now they have a financial  incentive to do so.

Some 24 hours after watching the ban take effect in Texas, the Supreme Court announced that it let the legislation stand after a 5-4 vote. Conservative Justices Samuel Alito, Clarence Thomas, Brett Kavanaugh, Neil Gorsuch, and Amy Coney Barrett said in their brief majority opinion that the law would stand while it continues to be litigated in lower courts. In her dissent, Justice Sonia Sotomayor called the law “a breathtaking act of defiance—of the Constitution, of this Court’s precedents, and of the rights of women seeking abortions throughout Texas.” The decision was a surprising move in particular because of the abortion-rights case—Dobbs v. Jackson Women’s Health Organization, which challenges a Mississippi ban on abortions after 15 weeks—that SCOTUS plans to hear in the coming months.

The ramifications of this decision are already reverberating deeply. On Tuesday, healthcare workers in Texas scrambled to see as many people as possible before the 11:59 p.m. deadline. There have been reports of anti-abortion fanatics appearing outside of clinics to threaten surveillance and intimidation, while groups like Texas Right to Life are mobilizing. Now, there’s a surge in demand for appointments at clinics in neighboring states including Oklahoma, Louisiana, New Mexico, and Kansas. Pregnant BIPOC are most at risk, especially Black women, who suffer from maternal mortality rates in Texas that are higher than the national average.

We knew that this debate would arrive on the steps of the conservative-majority Supreme Court in the wake of Donald Trump’s three appointments. Now we’re seeing the noxious reality come into focus—and, with similar heartbeat bills passed in several states in the past few years, this is likely just the beginning.

WHAT YOU CAN DO RIGHT NOW

Read this Next: All-American Trauma

There are millions of survivors who are trying with difficulty to understand why this administration, besides the obvious reasons, feels different than the rest.