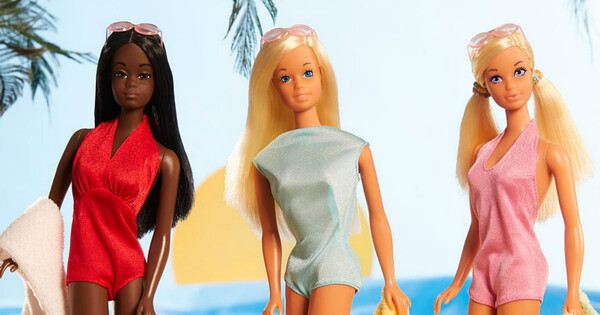 There’s an obvious resemblance between the original Malibu Barbie introduced in 1971 and actor Sharon Tate, who was murdered by the Manson Family in 1969. Both Malibu Barbie and Tate have the long, blond hair associated with ’70s fashion, piercing blue eyes, and an unbelievably thin body. The original Malibu Barbie even donned the same turquoise swimsuit Tate wore in 1967’s Don’t Make Waves. Malibu Barbie saved Mattel: Barbie’s sales began declining in the early ’70s after second wave feminists became critical of the doll’s impact on young girls. Mattel decided to give Barbie a new face—literally. For the first time in Barbie’s history, she began looking straight ahead instead of having a demure sideways glance. She suddenly had a toothy grin full of pearl white teeth, and she wore a bathing suit.

Though Malibu Barbie didn’t don the exact same bikini Tate wore in Don’t Make Waves, Barbie’s new swimsuit was the same color. Malibu Barbie’s hair was thicker than her predecessor, and she had tan skin to accompany the surfboard that came as an accessory. This was a new Barbie for a new time, but, somehow, her connection to a woman who’d been murdered was both overlooked and deemed acceptable. While Mattel has never confirmed that Tate inspired Malibu Barbie’s aesthetic, their uncanny likeness has come to light again as companies have begun celebrating the doll’s 50th anniversary. Barbie, of course, had been an overly thin, blond doll since its 1959 release at the American Toy Fair in New York, but Tate fit a specific mold that couldn’t be replicated, though it could be marketed to children. That also raises another question: How has a doll inspired by an actor who met such a brutal and tragic end become so successful? And what does that say about what we value?

Fifty years after Malibu Barbie’s release, Makeup brand Colourpop is selling Barbie-inspired lipstick and eyeshadow palettes. California clothing brand L*SPACE is partnering with Barbie for a swim line for adults. FUNBOY has a line of Barbie pool floats, Chi has a line of Barbie hair styling irons, and Stoney Clover Lane is selling bags of all kinds with Barbie faces and logos on them. Even Mattel is cashing in on the anniversary by selling ’70s style Barbies marketed toward adult collectors. All of these collaborations honoring Malibu Barbie’s semi-centennial celebration are marketed to adults, which presents a new shift for Mattel. Of course, children around the world still own Barbie dolls, but Mattel’s proving it can sell merchandise to adults who fell in love with Barbie as children. Mattel has used the last 62 years to inculcate children with a love for fashion, a skinny figure, and long, blond hair—all characteristics that Hollywood still idealizes.

Malibu Barbie still maintains unrealistic standards 50 years later. The fact that she was made to look like a murder victim shouldn’t be swept under a rug because the damage done to girls by Hollywood and Barbie are the same.

Though Tate, an up-and-coming starlet in the ’60s, costarred in movies such as The Wrecking Crew (1958) and Valley of the Dolls (1967), her untimely death is the reason she’s still a cultural touchstone. On August 8, 1969, Tex Watson, Patricia Krenwinkel, Susan Atkins, and Linda Kasabian, members of the Mason Family, murdered Tate in the Hollywood home she shared with her husband Roman Polanski. At the time, Tate was eight months pregnant, and friends attending a dinner party at her house that night were also murdered. Though none of the victims knew Charles Manson personally, Tate’s home was once occupied by Terry Melcher, who was unable to give Manson the music career he desired. Tate was simply in the wrong place at the wrong time and fell victim to a revenge plot that had absolutely nothing to do with her. In the wake of a violent murder, it seems senseless for Ruth Handler, Barbie inventor and cofounder of Mattel, to name her new doll Malibu, the name of Tate’s character in Don’t Make Waves, or for her to create a doll with a striking resemblance to the actor. And yet, the likenesses between the two are unnerving.

For 50 years, Malibu Barbie has been used to peddle unattainable and unrealistic beauty standards to girls, just as Hollywood has been doing since the very beginning. It’s not as though Barbie has gone 62 years without being criticized. On the contrary, both Barbie and Hollywood have been extensively scrutinized for perpetuating unrealistic beauty standards. In fact, research shows that if Barbie were real “she would be forced to walk on all fours and…be physically incapable of lifting her…head.” It’s physically impossible to be Barbie, and, despite this impossibility, many women, like Tate, have similar features. Barbie’s impossible physique has even led girls who play with the dolls between the ages of six and eight to experience more negative thoughts towards their bodies as they dream of one day looking like Barbie. In 2009, West Virginia delegate Jeff Eldridge even attempted to make the selling of Barbie in the state an “unlawful” practice, though he apparently never expected the bill to pass. His interest in banning Barbie is founded in the culture of beauty that Hollywood promotes, and these ideals can lead to eating disorders, among other life threatening issues. After becoming fed up with impossible standards, one high school student built a chicken wire and papier mache Barbie in 2007. Galia Slayen wanted to visually demonstrate exactly what unattainable beauty standards created by Barbie, among other cultural sources, would look like. What she landed on was a 6-foot-tall woman with a 39-inch bust and an 18-inch waist, a completely impossible woman.

That said, Mattel still sells 58 million Barbie dolls annually, and Malibu Barbie still maintains unrealistic standards 50 years later. The fact that she was made to look like a murder victim shouldn’t be swept under a rug because the damage done to girls by Hollywood and Barbie are the same. Our obsession as a society over the death of a conventionally attractive woman aligns with our obsession for Barbie in ways that are hard to miss. Like many martyred celebrities, a lot of Tate’s fame is founded in her murder. While the movies she acted in during the ’60s did moderately well, many movies have been made about her death, such as Once Upon A Time…In Hollywood (2019) and The Haunting of Sharon Tate (2019). The death of a blond, skinny, pregnant, Hollywood star caught everyone’s attention it seems—including Handler’s. Beauty standards don’t benefit the people they idealize any more than they do anyone else, and Tate’s murder shouldn’t be glamorized any more than Malibu Barbie should be accepted as she is.

As we celebrate 50 years of Barbie’s first new face, Malibu Barbie’s origins remain unconfirmed, but it’s hard not to believe that Tate didn’t at least cross Handler’s mind as she created a new doll. We know, collectively, that Barbie isn’t the most realistic toy to give our children. We also understand, even as adults, the compelling power of Barbie: hair to brush and someone to dress in fashionable clothing. Barbie isn’t going anywhere any time soon, but if we don’t at least question her presentation and its effects on women like Sharon Tate who make a career of looking a certain way, then we will never have a better toy for our children. As it stands, pressure from communities led Mattel to release a line of Barbies with curves, different skin colors, and even dolls with differing abilities in 2019, but that’s not enough. We have to change as a society. We have to create a world where children see different bodies as normal, one where a doll who can’t realistically hold up her own head isn’t the center of beauty standards.

Read this Next: Big Time Crush

“Never Have I Ever” is like a teenager: It wants to be popular, relatable, and alienating to no one.