In “Nightbitch” and “The Upstairs Room,” Postpartum Psychosis is a Home Invader 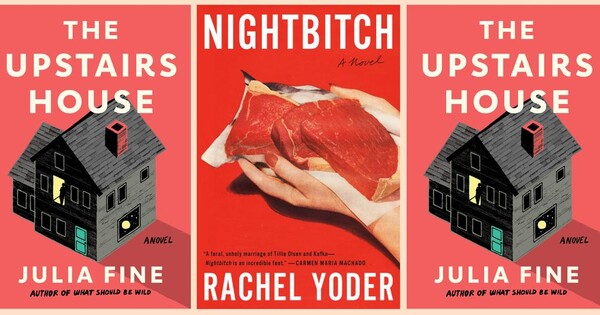 As someone who doesn’t want children, I find validation in books like Rachel Yoder’s Nightbitch, out this month, and Julia Fine’s The Upstairs House, released in February 2021—books that deftly portray the feeling of being utterly swallowed by the process of growing another human inside your body and ensuring said human thrives outside of it. But for those who either plan to birth and raise children or have done so already, both books hold up a mirror to the scary reality that pregnancy and childbirth are a very real—and often underdiscussed—gamble with mental health.

The Upstairs House follows Megan, a new mother and academic trying to finish her dissertation on children’s literature, particularly the work of Margaret Wise Brown, author of the bedtime classic Goodnight Moon. Megan begins envisioning a doorway above their apartment when there isn’t one. One day, it opens to reveal the dwelling of Brown herself, and Megan becomes embroiled in the author’s volatile relationship with socialite and actress Michael Strange, who in real life was Brown’s rumored lover. These hallucinations become such a feature of Megan’s daily life that she leaves her baby with Brown when she goes out one day, later coming home to find “the television remote was where it had been, the door to the downstairs bathroom cracked just as it had been when I left…. The pajamas I’d laid out across the bassinet still hanging there…. Where had Margaret gone? Had there been some sort of emergency? Why hadn’t she called?” From that point forward, Strange enters the picture as a sort of malevolent poltergeist, leaving baths overflowing and turning on the gas.

The Upstairs House deals explicitly with postpartum psychosis; Nightbitch, on the other hand, takes a more abstract approach, centering a different creative soul known only by her titular name. A visual artist at her wit’s end, she spends long days trying “to keep [her two-year-old] alive—that was the only artistic gesture she could muster,” and Yoder’s descriptions of this monotony are evocative and supremely relatable. (One such passage reads: “For dinner, she made the meal she had planned—turkey loaf full of grated veggies, and roasted potatoes, and a green salad—and even though the week before the boy had liked all of these things, he refused to eat them that night, screaming, Macaroni, macaroni!, until she relented and made him macaroni and cheese and peas. He ate two bites of each, then dumped the rest on the floor.”) And Nightbitch, like Megan, also has a maternal writer figure who looms large: Wanda White, the mysterious author of A Field Guide to Magical Women: A Mythical Ethnography, which Nightbitch uses as a kind of manual to understand what’s happening to her.

And what is happening to her? Nightbitch begins to notice the presence of a bump filled with hair on her tailbone, increased hair growth all over her body, and an insatiable taste for raw meat. Transformation into an animal is a familiar theme in fairy tales and horror movies, and readers can reasonably infer that Nightbitch’s physical changes are actually manifestations of a late-occurring postpartum psychosis.

Postpartum psychosis is a rare, sudden-onset condition that occurs in around 0.1–0.2 percent of women shortly after childbirth and can include symptoms such as hallucinations, paranoia, and hyperactivity. It’s very different from the postpartum depression experienced by roughly 15 percent of people who’ve given birth—and postpartum depression, in turn, is different from the hormonal shifts commonly known as “the baby blues” that affect a majority of those who give birth in the days following. What postpartum depression and postpartum psychosis do have in common is that both are often poorly understood and hushed up—but books like The Upstairs House and Nightbitch are evidence of a growing willingness to explore these conditions by bringing them to the fore.

The women in these books don’t have the benefit of such willingness, though. Their absent husbands aren’t interested in their partners’ struggles, and their families possess a dearth of understanding of the mental and physical toll of mothering. Megan’s signs of postpartum psychosis begin in the maternity suite when she starts seeing and hearing things that aren’t there, and her family is quick to dismiss them. “Just focus on the baby,” they say—a message they later contradict by telling Megan she actually needs to focus on herself, and a foreshadowing of the psychological advice she later receives in a different ward of that same hospital. Nightbitch, meanwhile, fantasizes about how much easier it would be if she dropped her artistic ambitions and instead focused on being a mother by renouncing her humanness altogether: “Dogs don’t need to work. Dogs don’t care about art. Why had this never occurred to her before?” She’s able to let go of the version of herself that wants to have an identity outside of her child, the version that struggles with how society might see her—“a privileged, overeducated lady in the middle of America living the dream of holding her baby twenty-four hours a day”—if she dared complain. Megan, meanwhile, finds that the presence of Brown and Strange bothers her less the more she writes.

The depictions of postpartum psychosis in The Upstairs House and Nightbitch might sensationalize the condition for purposes of storytelling, but they don’t demonize the women experiencing it; instead, they highlight the self-perpetuating loneliness and stress wrought by the condition, and the fear of how it looks to their partners and others. Nightbitch’s narrator even suspects that the neighborhood mothers’ group/herb-peddling MLM is actually a pack of fellow canine shapeshifters who might understand her own transformation. Yoder uses the languages of wellness, women’s empowerment, and corporate feminism to illustrate how Nightbitch perceives her own failings as a mother: If she were more present, eliminated distractions, and had “some confidence. Believe[d] in herself. [Made] the time,” then she, too, could be a supermom.

The depictions of postpartum psychosis in The Upstairs House and Nightbitch might sensationalize the condition for purposes of storytelling, but they don’t demonize the women experiencing it.

Both books, of course, are suffused with the fear that postpartum psychosis puts their protagonists’ children in danger. Megan leaves her baby alone, believing Brown is keeping watch; Nightbitch’s behavior pushes up against the borders of child abuse and abandonment, though her son revels in the “doggy game” that requires him to eat raw meat and sleep in a kennel unattended while his mother transforms. The nonexistent reactions of the women’s partners, meanwhile, underscore the isolating secrecy of their conditions. “While he was home, nothing happened. Nothing notable happened. Which is to say, he didn’t notice anything,” Fine writes of Megan’s home life. And though Nightbitch at first drops hints of her primal crossover to her oblivious husband, her increasing embrace of it urges her toward recklessness. “What if I just didn’t do a thing? she wondered. What if I just stopped? Would he notice? Would he do anything? So far, her findings were no and no,” Yoder writes. Both novels speak to the secrecy surrounding postpartum psychosis and, indeed, pregnancy, childbirth, and postpartum conditions more broadly. (“Maybe this was what happened to all moms and no one had told her, just like how she hadn’t known her feet would widen and extend after her son’s birth and her hair would come out by the handful in the shower,” writes Yoder.)

The Upstairs House and Nightbitch also have something to say about the conception of motherhood as a woman’s “natural” role—a role so important it means sacrificing mental health and forsaking all other interests and creativity. For the better part of a year, I’ve been telling a mom friend who experienced postpartum depression to read The Upstairs House, but she hasn’t been able to find the time to do so. Is it any wonder that out of the two books discussed here, the one that trades more heavily in unreality is the one in which the protagonist is able to reconcile her motherhood with her art?Using the heightened concepts of a long-dead famous author living in a nonexistent “upstairs house” and of a mother transforming into a dog, Fine and Yoder work alongside their protagonists to make  postpartum conditions more understandable without diluting their disorienting—and revealing—power.

Read this Next: Tarnished Wings

Victoria’s Secret’s brand was built upon the hypersexualization of women’s bodies and the glorification of eating disorders.