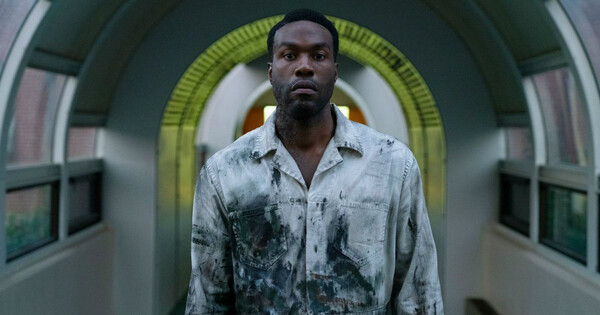 The monster, a technology older than the written word, is a tool of storytelling and, therefore, a method of worldbuilding. The monster menaces because it always comes back, as true in life as it is in movies. But monstrosity is an imagined condition—the object of a given subject, a gaze projected outward, and certainly the gaze cast on Chicago’s Cabrini-Green in Bernard Rose’s Candyman (1992). I’ve written before about that film’s protagonist Helen Lyle’s (Virginia Madsen) relationship to Cabrini-Green, its residents, and the Candyman legend, which is rooted in tourism and extraction for the express purpose of self-gain. The film’s subtext stokes long-held anxieties around Black masculine desire and doesn’t just prioritize the white gaze, but portrays Helen as a martyr, saint, and savior. Nevertheless, at its center, 1992’s Candyman functions as a commentary on storytelling itself and the nature of belief.

The name Daniel Robitaille isn’t uttered once in Candyman ‘92, but the story of his barbaric lynching for the “crime” of having loved and impregnated a white woman is presented as a villain origin tale. “The son of a slave” who grew up “in polite society” after his father amassed wealth as an inventor, horror is meant to be derived from the grotesque spectacle of the lynching’s details—the hand, the hook, the honey, the bees, the fire—but consider for a moment the horror derived from the decimation of his family’s new chapter, the potential future conjured and then devoured by the same violence that his father tried to escape. After his ashes are spread over the earth where Cabrini-Green was built, the generally accepted interpretation is that Candyman haunts the residents as retribution for the violence he suffered, which has never quite made sense. Why should white violence beget the haunting and torment of Black people? Because of the film’s stubborn refusal to either question or divest from the white gaze, it offers a limited perspective, even as Tony Todd’s narration gestures toward deeper considerations. “What do the good know except what the bad teach them about their excesses?” is a far more interesting question, for instance, than Helen’s struggle to contend with notions of the real, or possible.

In Candyman (2021), the new “spiritual sequel,” directed by Nia DaCosta and cowritten with Jordan Peele and Win Rosenfeld, the concept of time is slippery. We return to Cabrini-Green first in 1977 to witness—through the perspective of a young boy—the brutal police murder of someone we’ll come to know as Sherman Fields (Michael Hargrove), a disabled man they perceive as a monster. The film then fast-forwards to our current times. Cabrini-Green’s brick towers have been erased from the cityscape, replaced with luxury high-rises and home to upwardly mobile millennials, including could-be power couple Brianna Cartwright (Teyonah Parris), a successful gallerist, and stalled painter Anthony McCoy (Yahya Abdul-Mateen II).

Soon after moving into their apartment, Brianna’s brother, Troy (Nathan Stewart-Jarrett), tells them Helen’s story. Narrated with shadow puppets, Troy’s rendition details the events of the first film but erases Candyman from them altogether. In doing so, the story transforms into that of a mad woman who tries to ritually sacrifice a baby. Like the city over time, the legend’s architecture was knocked down, paved over, restructured. The story—as well as a lack of inspiration for his next painting—leads Anthony to visit Cabrini-Green, where he’s stung by a bee and has a chance encounter with William Burke (Colman Domingo), a lifelong resident and the defacto neighborhood griot, who reveals the truth about the legend. “One white woman dies in the hood and the story lives forever,” he says. “Helen Lyle was out here lookin’ for Candyman. I say she found him.” William tells Anthony the story of Sherman Fields—his memory of encountering “the true face of fear”—and it’s here, in the act of storytelling, that life is first breathed back into Candyman, an energy Anthony feeds when he channels it into a portrait of Fields’s beating intended for a show at Brianna’s gallery.

“That’s where the stories started, about them seeing him around Cabrini,” he tells her. “About him coming to get you. Over time, his name disappears, and he just becomes…the Candyman.” Skeptical, Brianna calls the portrait “a pretty literal approach…moving away from the symbolism of violence to the actual depiction of it.” Their conversation demonstrates the intellectual conflict that plagues contemporary discourse around Black horror, raising questions about the presentation, consumption, and exploitation of Black trauma as a form of commodification. But Anthony’s confidence in vision and subject propels his artistry, which, like the act of storytelling, conjures by giving shape, face, and form to the formless, literally drawing him into existence. The work culminates in “Say My Name,” a mirrored cabinet that opens to two portraits in conversation with the Candyman legend.

Anthony describes the project to a dismissive art critic as “trying to align these moments in time that exist in the same place. The idea is to almost calibrate tragedy into a focused lineage that culminates in the now…. The mirror invites you to attend the summoning yourself.” This statement not only strikes me as the film’s thesis, but an elucidation of the Black horror tradition as a whole. Horror movies—horror storytelling—grant us the capacity to aestheticize, experience, and confront terror in a safe container. What do we make of the fact that “the summoning game,” the most literal act of conjure, first necessitates a confrontation with the self? What does this mean for how Black people confront and conceive of history? Candyman doesn’t stalk or hunt his prey. He is conjured, summoned, called upon out of a desire for confrontation. Sometimes desire is layered with disbelief, but the summoner gets what they asked for regardless. When the initial murders bring attention and energy to his work, Anthony feeds this energy with research and more painting. He discovers Helen’s research tapes and recorded interviews, which also feed his growing hunger and confidence.

During another interaction with the same critic, Anthony points to the manufactured nature of poverty when asking, “Who do you think makes the hood? The city cuts off a community and waits for it to die.” His increasingly infected right hand becomes symbolic of the community itself. Once healthy, it succumbs to neglect and rot festers, takes over, and becomes the defining feature—a self-fulfilling prophecy determined by white-supremacist capitalism that begets consequences. A hand replaced with a hook; a community replaced with a monster. It’s here that Anthony first sees himself as Candyman and begins to realize the enormity of what he’s called forth—what’s taken hold in him as he continues to produce portraits of the “others” apart from Sherman—Daniel Robitaille in the 1890s, William Bell in the 1920s, Samuel Evans in the 1950s. “A story like that—a pain like that—lasts forever,” William says. “Candyman is how we deal with the fact that these things happened—that they’re still happening.”

The monster may be imagined by power but can also be conjured to protect the explicitly disempowered.

Instead of projecting the monster onto an outside other, that gaze is directed inward and outward simultaneously. In subject, structure, and method, the project taps into cosmologies of knowledge derived explicitly from African lexicons that don’t necessarily adhere to the prescriptive moralism of European binary logic. Consider Brother Anansi, the spider and keeper of stories, able to finesse knowledge and spin webs of logic that allow him to outsmart his rivals, no matter their relative power. He is very often questionable—but he survives, and this is the point. Stories are living things. They grow beyond us and are subject to interpretation, and therefore, mutation. As such, silence has its own place within African lexicons of horror, where the unsaid can be a sphere of preservation—a protection spell. This is demonstrated by Anthony’s mother, Anne-Marie McCoy (Vanessa Williams), and her choice to omit the truth of her son’s early experience in Cabrini-Green. As it turns out, Anthony was the baby Helen saved in the first film, and his unknowing return demonstrates in its own way that such forms of protection come with their own risks.

Gentrification is a process of revision—of rewriting the story and identity of a place. But historical revision is also a process of gentrification, one that perpetuates cycles of trauma, leaving us vulnerable to their reenactment. Such reenactment accounts for the film’s third act as Anthony, William, and Brianna’s personal traumas and tragedies intersect, coalesce, and are subsumed within the legend. Even if Candyman is sympathetic in the original, he’s still treated as a villain, a menace the residents of Cabrini-Green long to be rid of. In DaCosta’s rendition, William professes that “we need Candyman.” No one came to Cabrini-Green when it was “Candyman country.” The monster may be imagined by power but can also be conjured to protect the explicitly disempowered. Fear of the monster is fear of one’s own tail, one’s own reflection. Saying his name—saying their names—means conjuring that rage, that monstrousness within us. To let it protect us. That’s Candyman, “not a he, but the whole damn hive.”