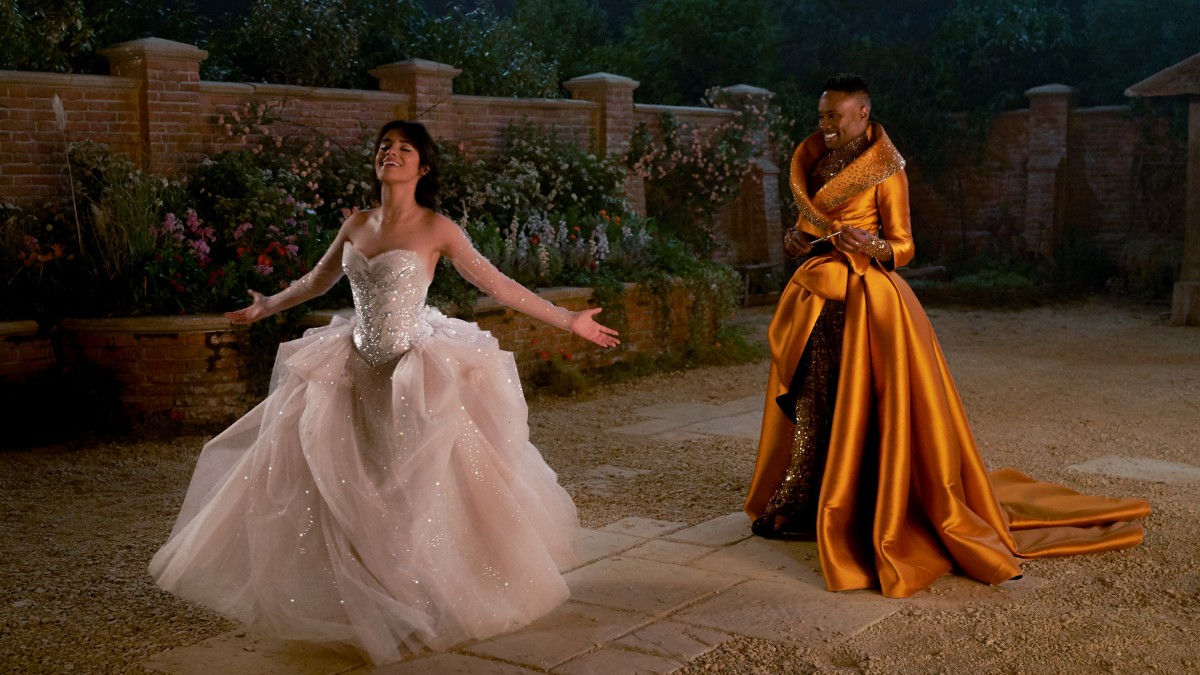 
Warning: Mild spoilers for ‘Cinderella’ below.

The new “Cinderella,” out now on Amazon Prime Video, opens to an electrifying wide shot of villagers dancing and singing Janet Jackson‘s 1989 hit, “Rhythm Nation,” while going about their daily routines in the market, clad in an explosion of vibrant colors and patterns, from gingham to paint splatters, and celebrations of global cultures, from the American Southwest to West Africa.

This fresh, bold and progressive vision of the classic fairy tale — with a twist ending — comes from writer-director Kay Cannon, who helmed prom night sex comedy “Blockers” and produced the “Pitch Perfect” franchise. Ellen Mirojnick, who received an Emmy nomination for her colorful, anachronistic Regency Era work in “Bridgerton,” designed the imaginative costumes, which run the gamut of decades in details, too (think: everything from Elizabethan skirting to contemporary skinny pants).

“In my point of view, a fairy tale does not have to take place in the Renaissance times, medieval times or in the 16th, 17th, 18th or 19th centuries. It can be any time, because it’s a fairy tale, and it’s your imagination,” says Mirojnick. “In this fairy tale, we wanted to introduce modern influences without making it a contemporary piece. That was, without question, not on the table.”

The new Cinderella (Camila Cabello) isn’t pining for a prince, but for a career in fashion design. “We have updated Cinderella to a more independent woman, who will break the glass ceiling,” says Mirojnick.

But in this vague fabled time period, becoming a “businessman” is an unheard of path for women. Her widowed step-mother Vivian (Idina Menzel) isn’t evil — she’s just jaded and pragmatic about future opportunities for her spacey grown children, Anastasia (Maddie Baillo) and Drizella (Charlotte Spencer), and the daughter of her late husband.

Cinderella’s basement sleeping quarters double as her workroom, with sketches and pastel tulle-draped confections strewn about. Day-to-day, our protagonist is practically dressed for her duties, with an update on traditional 17th century elements.

“I didn’t want to put her in a version of rags. I wanted this to be a bit more relatable, understandable and, I would not say ‘modern,’ but ‘workable,'” Mirojnick says. So, Cinderella wears a simple white cotton long-sleeve slip layered under a corset-topped dress hiked up at her ankles, for practicality’s sake. Granted, her triple-wrapped brown leather belt bag does feel very right now: “That was the modern touch because I just thought it actually suited her and when she went to town quietly to try to make transactions,” says Mirojnick.

Similar to how she referenced the Spring 2018 Chanel runway for “Bridgerton,” Mirojnick pays homage to house’s history for Cinderella’s fantasy sequence, where she’s running a successful dress shop named Ella’s that’s teeming with customers: “I thought, ‘Well, she’d be a little Chanel girl, you know? So I made a little top and a tulle skirt.”

Mirojnick was also tasked with bringing Cinderella’s dream gown to life for the fateful ball. The aspiring designer sets the bar high: “That design is pure fantasy. I don’t know if it’s even possible.” Behind-the-scenes, Mirojnick found herself in a similar quandary.

“This was the hardest job that I think I’ve done,” she says. (The fantasy ballgown speaks back to the dress collection that Cinderella has been creating in her basement atelier, after all.) “I realized that this was the biggest challenge of the entire show: Cinderella being the designer and I was the ghost designer.”

With enchanted powers, boundless imagination and apparently invisible magical tailors, butterfly-turned-guardian angel Fab G (Billy Porter) brings Cinderella’s dream gown to life using elements from the environment. Mirojnick’s inspiration was just as magical and infused from nature: “It’s like it fell from the sky, like powder puffs,” she says, dreamily. Mirojnick immediately nixed the pastel blue from the Disney animation and any movie trope-y climactic red for the color. “It was very much guided by lightness, air and glittering light,” says Mirojnick, referring to the iridescent ombré hues, floaty tulle layers and Swarovski crystal embellishments.

As for the silhouette, it was inspired by the famous glass slipper — or, the Swarovski-studded architectural stiletto pumps by Jimmy Choo, rather. Teaching Cabello to drape tulle layers on the dress form — kinda “Halston“-style — helped inform the flower petal-like layers of the skirting, too, “so it curves and curves with crystals and flower [appliqués],” Mirojnick says. “The whole entire gown curves continually, whether it be the folds of the skirt or in the waterfall of the back. On the back is this massive bouquet of flowers that is just beautiful.”

Nature informed the design of Fab G’s glittering and gender-binary-busting pantsuit with a voluminous ballgown-skirted wrap jacket as well. “The first inspiration was the monarch butterfly,” says Mirojnick, who then found the ideal fabric in an autumnal golden orange. “Jimmy Choo also made Fab G’s boot with a platform heel. It’s been screened, painted and stoned as a monarch butterfly, which is fabulous.”

Princess Gwen (Tallulah Greive)’s almost-futuristic, streamlined silhouettes, sharp power shoulders and severe black brocade and metallic-embroidered palette are “a bit classic, a bit serious,” says Mirojnick, who actively avoided recognizable time period cues. “Her shoulders was strong, her fabrics were sturdy. The shapes were very clean and not floaty at all, to indicate her seriousness about where her intentions lie as the People’s Princess — and what she wants to do with herself, the place, the town, the city.”

While Gwen’s time-free aesthetic could be described as conservative, Cinderella’s brash stepsisters, Anastasia and Drizella, definitely land on the opposite end of the spectrum. Their eye-popping colors and over-embellishments inevitably bring the Featherington sisters over in “Bridgerton” to mind. (“Oh, no!” says Mirojnick.) But, with their mix of contemporary influences and period silhouettes, these sisters’ overdone wardrobes hold a similar intention as their Regency Era counterparts: “They too were very presentational. There is no ‘marriage market’ in ‘Cinderella,’ but there is the hope that a suitor would come calling, and one of the sisters would become engaged or married, so they were always somewhat dressed to the nines.”

Unlike Gwen, matriarch Vivian’s jewel tones, vivid prints and pussy bow blouses all do speak to a particular decade — and designer from the era. “Our inspiration for Idina came from [’80s-era] Christian Lacroix,” says Mirojnick. “Her ballgown is so gorgeous. It’s all hand-embroidered.”

But in competition with Vivian’s daughters at the spectacular ball are a bevy of potential princesses from around the world, vying for the figurative rose — while Cinderella is networking for professional opportunities. Mirojnick and her team, who custom-built or customized the wardrobe closets, prepped and filmed the majority of the gala scene prior to the pandemic shut down. They bought around 200 quinceañera dresses from Mexico to transform into gowns representing around 20 cultures and countries around the world.

“We had a full team, great assistants, cutters and stitchers. The dresses had to be taken apart and everything else was refashioned, redesigned and re-fabricated to become this overly-done ball,” says Mirojnick. “It’s all fairy tale time.”

The Everygirl’s Ultimate Guide to Podcasts

Halloween Charcuterie Board | The Recipe Critic