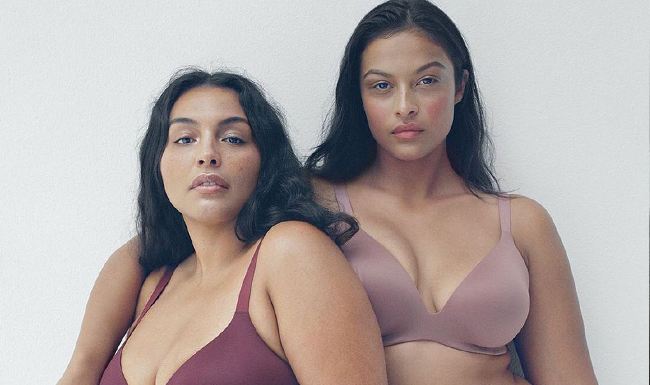 
You know what betrayal feels like? It feels like years—during middle school and high school—of me trying to squeeze my curves into itty-bitty Victoria’s Secret bras and loungewear because that’s what everyone else was wearing, just to get into my adult years and find out that the brand doesn’t believe it should cater to plus size or transgender women.

OK, to be fair, maybe it wasn’t the whole brand, but in 2018, the (then) Chief Marketing Officer, Ed Razek, put into words what we all felt—that Victoria’s Secret had a blatant size problem. After that, I vowed to never shop there again. It made no sense to me to spend money on a brand that not only neglected to prioritize my sizes but also made it clear that they were not for fat women.

Now, in 2021, I’m reconsidering my “never” statement. Victoria’s Secret is undergoing a rebrand in which they’re seeking to redefine the definition of sexy by highlighting women of all body types, races, and sexualities and by replacing their brand-famous “angels” with what they’re referring to as “what women want” rather than catering to the male fantasy. Now, they’re attempting to get in touch with the customers they lost by focusing on women we adore for their beauty as well as their accomplishments (like Megan Rapinoe and Priyanka Chopra-Jonas).

“When the world was changing, we were too slow to respond,” said Martin Waters, the former head of Victoria’s Secret’s international business who was appointed chief executive of the brand in February, to The New York Times. “We needed to stop being about what men want and to be about what women want.”

Moreover, they’ve added XL and XXL to their repertoire, increasing their size range from 00-12 to 00-20.

The question remains: Will this rebrand be enough to win over and win back so many scorned by the company’s actions in the past and Razek’s comments only a few years back? Watching a brand that’s known for an outdated standard of beauty listen to customers and modernize themselves is exciting, especially when they once held onto their archaic views with white knuckles. It also helps that the company now has an entirely new executive team and is forming a board of directors where all but one seat will belong to women.

While it’s up to those of us who have been scorned by the company to decide if we’re willing to give them another chance, we support their change and transition to being a brand that’s one for all women, not just the ones that fit their former beauty standard. These are the pieces we’re loving from their new collection—and just might be adding to our carts.

Embrace Rebirth and Peace By Surrendering the Outcome

How I Shop: Kit Keenan