Sherman Alexie and the Toll of Literary Tokenism 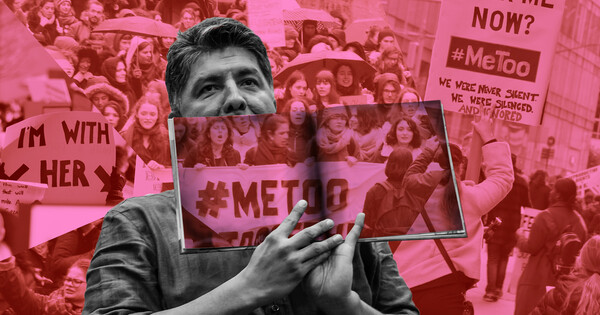 It’s been four years now since the #MeToo movement went global, and a little more than a year since a racial reckoning enveloped the country, spurred by the murder of a Black man at the hands of the Minnesota police. After the surge of the news cycle abates, we are left to parse out what has shifted and what remains the same. We’re in a moment now where there is a groundswell of Native-led media with more shows and books and journalism created by Indigenous authors and a spotlight of a greater magnitude highlighting that work. But one man, once celebrated as a nearly singular voice for Indian Country, is notably absent.

In 2007, Sherman Alexie won the National Book Award for the young-adult novel The Absolutely True Diary of a Part-Time Indian. Growing up as a biracial Ojibwe and Jewish kid in predominantly white Vermont, I didn’t necessarily have everyday conversations about being an indigenous kid with my parents, but they always made sure there was at least one copy of the book in our house for me and my younger brother to read. Alexie, an enrolled member of the Spokane Tribe of Indians, grew up on the Spokane Reservation, and his novel—about a boy growing up between the reservation and a nearby all-white town—was set there as well. I always liked stories, and in a world with very few mainstream ones about indigenous kids, it was something special.

When I was getting my undergraduate degree in literature, Alexie was one of the authors assigned in a Native American Literature class. When he came to read from one of his novels (I don’t recall which) I went to see him speak. I remember sitting in the vast, dark expanse of the Coolidge Corner Theater in Brookline, Mass. and watching Alexie, illuminated by the glow of stage lights. I thought about what it would be like to write a book, to go on a tour for that book. At around the same time, I watched Smoke Signals, the 1998 independent film for which Alexie wrote the screenplay. Adapted from his 1993 collection of short stories, Tonto and the Lone Ranger Fistfight in Heaven, the film was widely and critically acclaimed, and echoes of it are visible in Rutherford Falls, Reservation Dogs, and other Native-forward media of today. Smoke Signals was the first movie I’d seen that wasn’t interested in explaining Indians to non-Natives; it didn’t feel like a movie created for a white audience—it felt like it had been created for people like me.

In this, I wasn’t alone. Alexie was already a darling of the literary world, a poet and writer who was unquestioningly one of the nation’s best-known writers, anointed by the likes of NPR and The New Yorker and taught frequently in high-school and college classrooms. But in 2018, that started to change. As the worldwide #MeToo movement began picking up steam, authors were among those taking a harder look at their own industry and the power dynamics central to it. One of them, children’s-book author Anne Ursu, began surveying women in her industry about sexual harassment. “Sometimes,” Ursu wrote in a Medium article about what she learned, the stories she heard “reveal[ed] serial predators unchecked by an industry that does not want to acknowledge such things of its men.”

And though Ursu kept her sources anonymous, it was in the wake of her piece that rumors about Alexie began surfacing. When NPR arts correspondent Lynn Neary reported on the accusations in March of 2018, she was able to talk to 10 of Alexie’s accusers, three of whom were willing to speak on the record. They described a man whose success had made him a gatekeeper and mentor. For younger authors, his recommendation or interest could carry tremendous weight. Alexie, they reported, regularly leveraged his literary success to draw women to him under the guise of writing advice or help in publishing; their friendly interactions would suddenly turn sexual, the women recalled, and in some cases ended in sexual activity that was consensual, but coerced. “Women allege Alexie preyed on Native American women writers in particular,” wrote Jacqueline Keeler in a 2018 for Yes magazine. Alexie, for his part, circulated a statement that confirmed, if vaguely, the accusations: “There are women who are telling the truth.”

There were repercussions after the allegations became public. The Institute of American Indian Arts changed the title of their Master of Fine Arts scholarship named for Alexie; as the program’s director told the Santa Fe New Mexican, “No one’s going to want to be the Sherman Alexie Scholarship [recipient] right now…. I can’t give that scholarship to a woman, for example. It’s going to be uncomfortable to accept that.” The American Indians in Children’s Literature blog wiped all references to Alexie, and the author himself declined to accept a literary award for his 2017 memoir You Don’t Have to Say You Love Me.

The response to allegations against Alexie highlight the collective turn to social sanctions in the absence of a justice system that reliably holds perpetrators to account. Sometimes such sanctions take the form boycotts: not watching or reading or teaching a novel or a movie because of the condemnable behavior of its creator. A jail sentence comes to an end, but there’s no timeline on when to ever return to a once-loved title. And obviously it’s not just Alexie and his work that are implicated: Junot Diaz, who immigrated to the United States as a child, won a Pulitzer in 2008, and then faced allegations of sexual misconduct in 2018. But an investigation by MIT, where Diaz teaches creative writing, cleared the author after the university announced that they hadn’t found evidence of wrongdoing. Diaz also stayed on as a fiction editor at the Boston Review, although the magazine’s poetry editors resigned in protest of the decision. Diaz himself withdrew from a writers’ festival and stepped down from the Pulitzer Prize board. The Boston Globe later called this a “turning point” in the #MeToo movement, where the consequences that institutions doled out were less severe than in other cases, absent a “deluge” of accusers.

Even when those who abuse their power fall, it’s not as though that power is transferred to those who didn’t have it before.

But the question remains: When is a particular punishment enough? When should it end—or should it last forever? What do we do with the work of people who have done bad things? Is it about the exchange of money—not buying a book, not renting a movie? Are boycotts of authors with predatory backgrounds enough to upend the structural elements that have allowed them to operate in the first place?

We haven’t come up with satisfying answers to these questions, though it’s worth noting that the consequences for Alexie, Diaz, and others have contributed to a vitriolic backlash against what’s come to be called “cancel culture.” In the three years since Alexie’s accusers came forward, he hasn’t published another book. Maybe he never will, or maybe he’s just quietly waiting for the moment to pass. Ultimately, social sanctions are about power, which historically has prevented—and in many cases still does—male authors like Alexie, Diaz, and many more from feeling significant consequences. But even when those who abuse their power fall, it’s not as though their power is transferred to those who didn’t have it before. Too often in the #MeToo movement, accusations against powerful men have proved just as punishing—and often a lot more so—to those who come forward with them and quickly become targets themselves.

Of course, in a time when movements to defund and even abolish the police have gained traction in an arguably unprecedented way, it’s clear that a collective rethinking of criminal justice is in order. There’s growing recognition that mass incarceration disproportionately harms Black and Brown and poor communities, and that it reliably favors those with money and power. Social and career consequences in the world of literary publishing may stick, but can it really change an industry that runs on favoritism of all kinds?

Sherman Alexie was a success story who rose in a time when the publishing world elevated non-white writers one at a time. The evolution of that world, while still incomplete, means there’s no single writer or poet who has filled the space Alexie once occupied. And I’d argue that we may be better off for it. Because as this one man has stepped aside, a multitude have stepped forward: Sierra Teller Ornelas, Sterlin Harjo, Taika Waititi, Robin Wall Kimmerer. It’s not just that one voice is no longer enough, but that it never was.

Read this Next: An Old New World

Colonization and marginalization are commonly used as plot points, but for Native Americans these are not fantastical, imagined scenarios. We live them.