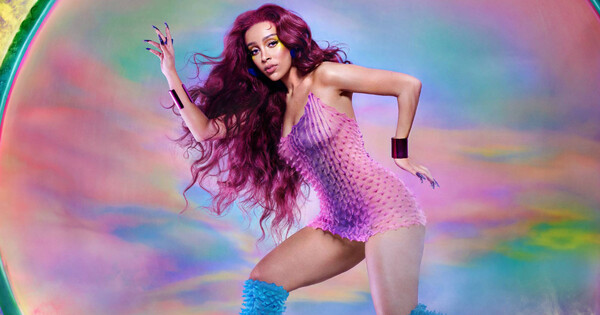 Doja Cat on the cover of Planet Her (Photo credit: David LaChapelle)

Doja Cat is many things: She’s unorthodox, sexy, and often problematic, though her talent has recently begun garnering more attention than the controversies that previously swirled around her. She cleverly wields her lyrical prowess over playful rhymes, but she can also hold a note. She’s mastered the internet (Who can forget the chaotic ingenuity of her viral 2018 song “MOOO!”?). But more distinctly, Doja Cat is weird. On her latest—and her best—album Planet Her, she uses her quirkiness to paint a feminist world in which she celebrates every aspect of her personality while simultaneously marking her territory as a pop superstar. Doja Cat burst onto the scene with the “MOOO!” music video, where she eats a cheeseburger, fries, and a milkshake (at one point, she unabashedly flaunts one french fry in each of her nostrils); twerks to a background full of gifs; and raps about being a cow, despite her stage name (“Bitch, I’m a cow, bitch, I’m a cow/ I’m not a cat, I don’t say meow”).

She also interpolates rap classics, including Wu-Tang Clan’s “C.R.E.A.M.” and Kelis’s “Milkshake.” The chaotically silly video immediately went viral, garnering more than 89 million views to date, and propelling Doja Cat to mainstream success. But it was her 2019 sophomore album Hot Pink that showed the world that she can create more than memes. Hot Pink offered what fans have grown to love about the 25-year-old rapper and singer: overwhelmingly sex-positive and humorous lyrics, genre-bending beats, and catchy hooks. Songs such as the pop-heavy “Cyber Sex” and the disco-infused “Say So” (the remix of which became her first number one hit) feature a Doja Cat who’s very in tune with her sexuality and isn’t afraid to share how horny she is (“I wanna touch on you/ You see me in my room/ Wish you were here right now/ All of the things I’d do,” she sings on “Cyber Sex”). If Doja Cat’s earlier releases were a preview of the artist’s boundless creativity, then Planet Her vastly expounds on that, sharing with listeners just how devoted she is to experimenting with her sound and artistry.

The 14-track album—plus an additional five songs on the deluxe edition—is a thrilling ride into Doja Cat’s mesmerizingly horny and eccentric world. The album starts with “Woman,” an afrobeats track on which she playfully rhymes about her femininity and exposes the faulty perception of women needing to be monolithic (“I could be the leader, head of all the states/ I could smile and jiggle it ’til his pockets empty/ I could be the CEO, just look at Robyn Fenty”). On the more dancehall-tinged “Naked,” Doja rhymes about her immediate need to undress and have sex with a partner. The song’s swift, upbeat production paired with Doja Cat’s breathy vocals highlights the urgency of the matter: “How do I keep this on?/ How do I let you know?/ Boy, you deserve a show/ Deserve to get comfortable.” “Tonight,” which features a surprise collaboration with Eve, is a standout. The nearly three-minute track has the backing of a five-beat electric guitar rhythm that sounds exactly like the era of music when Eve was in her prime.

Throughout the song, the pair sings and raps about being caught in a sexual trance with someone else’s man (“You see my eyes, boy, I just can’t keep em off you/ Turnin’ me on I―I just can’t see through you/ God bless your girl ’cause this feeling, it is voodoo,” Doja Cat sings in the first verse).  Doja Cat again sings about lusting after someone on the futuristic “Need to Know.” She sonically paints a galactic universe, as proven by the song’s video, in which she desperately wants to know if the partner she has eyes for is ready for sex: “I just can’t help but be sexual/ Tell me your schedule/ I got a lotta new tricks for you, baby/ Just sayin’ I’m flexible.” While taking listeners on a delightful journey through all the genres that inspire her, she also reminds us that she’s in the driver’s seat when it comes to her sexuality—and her destiny. On “Payday,” a perfect hip hop and pop mix that features Young Thug, she raps about how far she’s come in her career, the excitement she feels while on the brink of superstardom, and being able to share that success with others. She raps in the first verse, “Said everything that I want/ I don’t need it, I got it already/ Tell me what you want/ Point to it, I got you baby.” From there, the album shifts to the trap-infused “Get Into It (Yuh),” which sounds like a song Playboi Carti would record (if only Whole Lotta Red wasn’t as lackluster). The short track features the artist flexing about the success and attention she’s received so far: “Y’all need to get into my drip like y’all need water/ I mean, it’s only head-to-toe Balenciaga.”

At the end of that verse, she pivots to four lines of theatrically driven and rapid lyrical annihilation that are reminiscent of early career bars from Nicki Minaj, whom Doja Cat thanks at the end of the song. The album ends with the lead single “Kiss Me More,” featuring SZA, which peaked at number three on Billboard’s Hot 100 chart. The song features an infectious pop beat and can be rightfully dubbed a song of the summer and among the best released this year. Planet Her peaked at number two on the Billboard 200 chart the week after its release, adding to Doja Cat’s growing repertoire of commercial successes. It’s the artist’s highest-charted album, which seems appropriate considering that Planet Her feels like a debut, one that’s free from controversy. Since Doja Cat’s ascent in 2018, she’s doubled down and eventually apologized for using a homophobic slur and for being in racist chat rooms.

This new era of Doja Cat’s career seems like a renewal.

The success of her only number one single “Say So (Remix)” was tainted because it was produced by Dr. Luke, who Kesha has accused of of raping and abusing her. Although the producer signed Doja Cat to his label, Kemosabe Records, prior to the allegations, she has maintained a working relationship with him. Regardless, this new era of Doja Cat’s career seems like a renewal, and her latest offering features significantly fewer (two) appearances from Dr. Luke compared to her previous releases, hopefully hinting at an eventual professional split. Planet Her proves that Doja Cat doesn’t need any controversy or the backing of an alleged abuser to claim her title as pop’s next big star. Her talent is more than sufficient. On Planet Her, Doja Cat proclaims that women are superior beings, and, in doing so, she stakes her claim to a supreme career in the pop realm.

Must Read: Justin Bieber Is the New Face of Balenciaga, Marc Jacobs Beauty Will Relaunch

How to Make Sourdough Starter Recipe