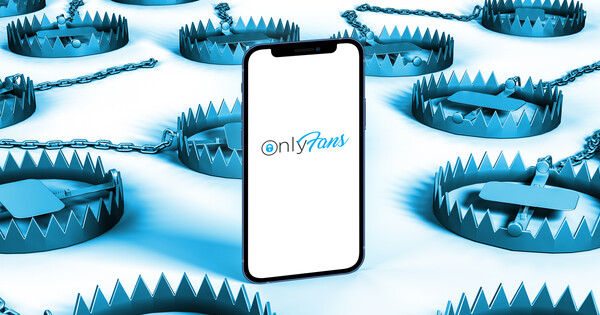 Sex workers, who expressed their frustration on social media, felt understandably angry and betrayed. In response, OnlyFans weakly acknowledged the contributions sex workers made to their platform and promised it’s working on solutions. Sex workers like Sydney Leathers didn’t want to hear it, tweeting, “If you gave a shit you wouldn’t have given the media a press release before you even told creators.” Porn star Wolf Hudson added, “If it’s sex work is work, then fight for us. Don’t run off like a little biatch after profiting from [sex worker] labor.” There’s one question that still remains unanswered: If OnlyFans is going to still allow nudity, couldn’t creators just work around the new guidelines? The answer is complicated. Historically, vaguely defined censorship of “explicit material” has disproportionately impacted Black women, LGBTQ people, fat people, sex educators, and other marginalized groups—even if they’re following content guidelines.

OnlyFans’s own content moderation policies admit that more popular creators are allowed to slide on the TOS whereas smaller creators would be regulated. Their new TOS states “breaches of this Policy may lead to your account being suspended or terminated, and access to your earnings being revoked.” There is no outline for an appeal process, so potentially running afoul of what might be considered “explicit” would have an immediate financial impact. That might be intentional given that OnlyFans ultimately blamed credit card companies for this move, following in the footsteps of other sites who have divorced themselves from adult content over the years. Mastercard said that they never specifically asked OnlyFans to enact a ban, which is true; however, in April, they did enact a policy that required adult creators to keep extensive records and review their content before it’s published. If creators don’t have the appropriate paperwork, their payments will not be processed and they may be banned from using the payment processor. Also credited? The Fight Online Sex Trafficking Act and the Stop Enabling Sex Traffickers Act, a 2018 bill nicknamed FOSTA-SESTA, which put the responsibility for ensuring sites weren’t used for the amorphously defined “sex trafficking” on the website owners themselves instead of on the users uploading content.

Rather than investing in secure server space to keep such records or employ more content moderators (in the case of FOSTA-SESTA), many companies chose instead to ban anything that might be construed as explicit content or simply go offline. It’s in this confusing whirlwind of constantly changing information where we find ourselves now. OnlyFans backed down from their October 1 TOS, and as of August 25, the company said it will continue allowing explicit content. The subscription site said it has “secured assurances necessary to support our diverse creator community,” though according to Variety, “an OnlyFans spokesperson declined to say which bank or banks it has new or renewed payment-processing agreements with.” This lack of transparency doesn’t bode well for the future, and many sex workers are taking this as a stay of execution rather than a win, saying the whiplash is reminiscent of an abusive relationship. Ultimately, we have the religious right nonprofit National Center on Sexual Exploitation (NCOSE) to blame for websites being in this conundrum.

The NCOSE, a lobbying organization and a primary supporter of FOSTA-SESTA, have been pushing payment processing companies to do more to “fight abuse” on their platforms. Originally calling themselves “Morality in Media,” the group rebranded in 2015 to focus their anti-sex work efforts on “protecting people from exploitation.” As many of the companies they target are based in the United States but vital worldwide, this effectively works to evangelize and enforce their morality war around the globe. OnlyFans was only the most recent platform hit by NCOSE. Famously (and often cited in the OnlyFans kerfluffle), Tumblr banned pornography in 2018, taking a huge financial hit in the process. It was far from the only one. Craigslist banned adult services ads in 2010, going so far as to remove the personals section entirely in 2018 to comply with FOSTA-SESTA. WePay famously withheld funds from a medical fundraiser for sex worker Eden Alexander in 2014 because she retweeted someone selling adult content.

Though TikTok was already banning sex workers for having an OnlyFans in 2020 (even if their content followed the TOS), NCOSE still pushed TikTok to have more robust moderation policies in 2021, including automatically censoring anything determined to be “adult nudity or sexual activities.” Even banks have been caught terminating the personal and business accounts of those they determine to be “adult content.” I have at least 29 examples of large companies banning adult content and/or sex workers from their sites over the last 10 years–and that’s not a comprehensive list. So where does this morality war leave the sex workers who relied on OnlyFans for a large amount of their income, particularly during a worldwide pandemic where in-person work was even riskier than usual? Many are posting recommendations for other sites that have more generous policies. Companies such as Bellesa and Fansly are eagerly promoting themselves as the next big thing for the adult industry, saying that they’re dedicated to staying sex-worker friendly. I know Patreon was adult content friendly when I signed up in 2013. However, in 2014, Patreon got pressured by PayPal to ban explicit content, holding the entire site hostage by refusing to process payments until Patreon moved all adult payments to credit cards.

In 2018, Mastercard and Visa tightened their chokehold on Patreon, forcing them to suspend adult creators or risk losing their ability to use the credit card processors. Despite not creating or linking to adult content on the site for more than six years, I am still shadowbanned on Patreon, unable to be featured or to be searched on the site. Patreon has apologetically told me there’s nothing they can do. So I am very aware of what happens when NCOSE and similar groups decide to put a site in their crosshairs. I have no doubt that the sites being suggested have the best of intentions, but Mastercard and Visa have a near monopoly on payment processing around the world. Payment processors are therefore able to regulate adult material at the very root—sex workers getting paid for their labor. As long as Mastercard and Visa take an anti-porn, anti-sex work stance, none of these sites are safe. Visa and Mastercard pulled their support from Backpage, years before the government swept in and closed the site for good. This happened again when the major credit card companies pulled the rug out from under Pornhub, causing the site to pivot to exclusively using cryptocurrency.

That idea—moving toward crypto—could be a viable option for sex workers, especially when the crypto market has been trying to woo sex workers for years. Edward Snowden tweeted that “Bitcoin fixes this” in response to the OnlyFans news and Newsweek published an article praising the blockchain for adult content, pointing out that chargebacks were impossible (one excuse often cited as to why payment processors don’t want to process adult payments). This isn’t the first time the blockchain has been highlighted as a possibility to bypass traditional payment processors. In 2015, Vice published an article about the adult industry becoming more fluent in Bitcoin as sex workers teach other sex workers how to use cryptocurrency. Of course, the anonymity of cryptocurrency, part of its selling point for sex workers, has been increasingly charged with making it difficult for law enforcement to combat drug cartels, child sexual exploitation, and other illegal activities. This has led to political pressure to regulate it in ways that are reminiscent of the early days of online payment processors. Only time can tell if Bitcon, Etherium, and other crypto technologies will be successfully pushed to stop supporting sex work or risk losing their lobbyists.

This is a battle for authoritarian control, with the most marginalized continuing to bear the brunt of it.

As we’ve seen, when the valid and necessary work of preventing exploitation is the driving force, sex workers become financial casualties. There’s a lot of fluctuation in how “trafficking” is defined—some more anti-prostitution than others—and many times, the focus of migrant worker exploitation on “sex trafficking” really serves to reinforce racist and misogynist ideas about labor and migration. These disparities in definition make “anti-trafficking” conversations and policy decisions particularly and pointedly harmful to already marginalized sex workers. Even when someone has been exploited by the adult industry and thus takes the help of “anti-trafficking orgs,” they can become a pawn in a greater morality crusade rather than getting the help they were promised. As Rose Kalemba wrote in a recent blog post, coming out against Pornhub for overlooking abuse on its platform opened her up to being exploited by a self-appointed anti-trafficking advocate.

“I’ve been horrified over the last year to both witness and experience firsthand the way that ‘anti-trafficking’ lobbyists and ‘advocates’ are so eager to use our trauma for their own personal gain,” Kalemba wrote. “You cannot uplift some survivors by oppressing others,” they continued. “You don’t protect children by punishing sex workers, many of whom are just trying to feed their own children.” Ultimately, as we’re all learning, the OnlyFans debacle is a part of the same fight that has been going on for centuries—organized religion battling against pleasure through legal precedent, social stigma, and conservative fanaticism. NCOSE now plans to demand the Department of Justice investigate OnlyFans, so this is far from the end. This is a battle for authoritarian control, with the most marginalized continuing to bear the brunt of it. And as always, it is only through decriminalizing sex work and ending the stigma that we will see any true, lasting stability and safety.