“Made in China” Exposes the Abusive Nature of Garment Factories 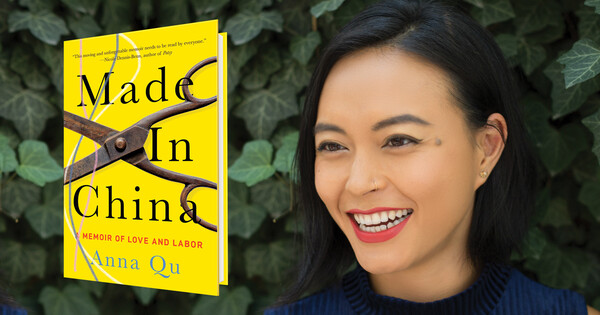 Made In China by Anna Qu (Photo credit: Catapult/Alex Pedigo

In the opening pages of her debut memoir, Made in China, Anna Qu uses exacting detail to set the scene of the garment factory where her teenage narrator is forced to work. There’s the drone of industrial fans circulating “flat, hot air” and bits of lint, fabric, and debris that catch on her leg and lip as she walks to her work table where she spends more than 40 hours per week. Here is her spot among the other “cutting girls,” who snip loose threads from garments until blisters and sores mar their hands.

This is no ordinary after-school job, and Qu is no ordinary member of her family. The owners of this New York City sweatshop are her mother and stepfather, and she’s the only one of their three children who is made to toil, both at the factory and in their home where she is physically abused and treated like their maid. Unlike her American-born stepsiblings, Qu was born in China. After her father dies and her mother immigrates to the United States, Qu is left with her grandparents until the age of 7 when her mother returns to take her to New York. Upon her disorienting arrival, Qu must rely on her powers of observation and perception to survive a punishing home environment and find her way out. Bitch spoke with Qu about how she learned to claim her story, how she renders trauma on the page, and how she cares for herself and her readers.

How did you know you were a writer?

I really pushed against being a writer. I didn’t feel like I had the right to be a writer because I was working-class and needed to make ends meet. I had so much financial insecurity after being kicked out of my home as a teenager. I wanted to get into publishing, but the cost was prohibitive. [Entry-level salaries are so low that] you can’t make a living if you don’t have a safety net. I always felt like I needed to survive before I could write, so I had a day job and saved up so that I could put myself through grad school at Sarah Lawrence. I needed that validation, on a degree level, [to have] confidence in being a writer. I’ve always been self-conscious of my grammar because I learned English as a second language.

It’s a triumph that you’re an author and that English was your second language. How did you find the story that you wanted to tell?

I started the book in grad school. It was one of the pieces in my thesis; it was called “Factory Life” at the time. There’s something about the [graduate school writing] workshop that’s [inherently] very white and privileged. I was aware of it right away, but instead of questioning the system, I just felt isolated because I was an outsider. I knew I wanted to write a memoir. To me, working in a sweatshop [as a teenager] has no shock value because that’s always been my life. But I recognized that was a hook for a reader. I felt like the element of the factory allowed me to express my experiences in a way that could really get to the reader, and I could create a compelling story around it. Everything my narrator is observing has to do with class, with being seen, and with how we’re defined by work and the class of that work.

Your book is so disciplined in its focus on work and labor. How did that through line emerge?

There aren’t a lot of books like mine out there because people like me are trying to survive, but more of these stories need to be published. I’ve always sought compassion in life, and frequently I received it from people that I worked with: The women at the sweatshop I worked with at the cutting table or a woman I worked with at a Vietnamese restaurant during college. All the people I’ve come across who have been really important to me in my life have always been working-class. Even though they weren’t able to help me [directly] on my path [to becoming an author], they were lovely resting places for me. Megha [Majumdar, my book editor at Catapult,] really teased that out in the second half of my book—how some of our self-worth translates to [our] work. That connection is a really important one that really struck me as I was working. Sometimes people ask me, “How did you know that you deserve love?” In hindsight, I don’t know. All I know is that as I was looking forward [in life], that was what I wanted more than anything else.

That’s such a tough question. Doesn’t everyone deserve love? That actually leads me to my next question: How did you protect yourself when you were writing about traumatic events?

It took me 10 years to write this book. Writers are constantly trying to get published, get validated, get acknowledged, and of course I wanted this book published much sooner, but it wouldn’t have been the book it is today. By giving myself that time, I was allowing myself to write the experiences however I needed to write them, then [I could] begin to transform it into what I wanted to tell the reader. In grad school, sometimes I would sit down and write for five hours, and it was so emotionally traumatizing. When you write a vivid scene, you do have to relive it and all of those feelings come back. I needed something else that was art for me. I took a painting class as an elective, and it allowed me to be more free in terms of expression.

Made in China by Anna Qu (Photo credit: Catapult)

Are there any books or writers that you’ve looked to as your guides?

One book that really resonated with me as a writer was Lucy Grealy’s Autobiography of a Face. That book was so powerful for me because she went through so much pain, but she writes about pain in a way that doesn’t burden the reader. She talks about being kind to the reader. [When writing about physical abuse], I was thinking about balance and how to be kind to my readers so that [I wouldn’t] traumatize them the way I was traumatized. She also talked about not including the worst things that have ever happened to you because that’s not what it takes to get empathy from readers. I didn’t want the most awful things that happened to me to be sensationalized. That’s a very challenging feat.

As the reader, I could see the control you exercised as the writer. It was protective and so effective. You’ve mentioned before that when you were writing this book, you kept it close to yourself. Why was that?

In workshops, I’ve been told too many times that my experience is unreal and unbelievable. I didn’t want that type of feedback [as I was writing], and I didn’t want to let anyone into this book until I felt it was done, until it was strong enough on its own, until it was its own shape and could withstand feedback. This book lived in a very siloed place for a long time. I spent eight or nine years on the book before I let anyone read it. I took it as far as I could before I found an agent [Duvall Osteen] and then Duvall and I worked on it for about eight months. Then Megha at Catapult picked it up in under two weeks. So that was incredible. Even though I spent so long [writing] the book, I was really, really fortunate in how quickly it [moved] from agent to publication. That process was pretty much seamless.

It’s so fortunate that you found the right people to work with you and see your talent. What role does community play for you, both as a writer and as an educator?

I have a really great community of friends. Community is key. I think nonfiction [writers] don’t have as strong of a community as poets and fiction writers [do], and I always felt that gap. That’s one of the reasons I like teaching so much, especially nonfiction, because it allows me to be in that kind of community.

Nonfiction has been shut out of academia for so many years. There were no creative nonfiction classes when I was studying creative writing in college, and even now, some nonacademic organizations offer programming only in poetry or fiction. Does knowing this ever factor into your teaching?

I just love teaching so much. There are very different ways of telling a story and different ways to focus on characters. I’m very cognizant of that when I’m teaching, so I’m careful about the language of how we’re telling stories and why. It’s incredible to see the diversity I get in my classes. I thought teaching at the MFA level was a goal I wouldn’t reach for years, and it happened right away, so that blew my mind. It’s a dream job for me.

This interview has been edited and condensed for clarity and length.

JBC Is Hiring A Director of Fashion & Lifestyle In New York, NY Or Los Angeles