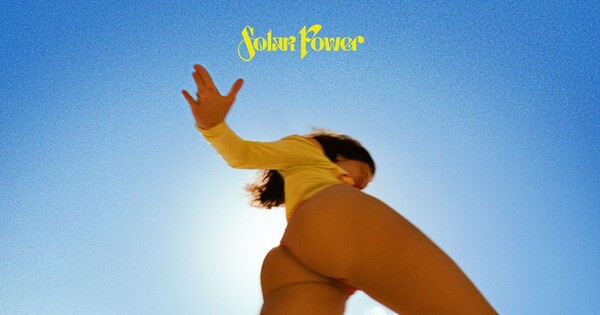 Lorde on the cover of Solar Power (Photo credit: Courtesy of Universal)

Four years after releasing Melodrama, Lorde is back with Solar Power (released on August 20), a languorous paean to taking a step back, turning off your phone, and basking in the sun. Solar Power is a marked departure from Lorde’s first two albums, Pure Heroine and Melodrama, and there’s little of the anthemic synth-pop that she’s been previously lauded for. But this departure is purposeful: Lorde is creating a rupture between where she’s been and where she’s going. In “The Path,” the 24-year-old pop star declares, “Now, if you’re looking for a savior/ Well, that’s not me.” She plays with messianic themes throughout the remaining 11 songs, too, teasing the idea from all angles by insisting that she’s not anyone’s savior in one song and then claiming she’s “like a prettier Jesus” in the next. In “Leader of a New Regime,” she laments the absence of “somebody, anybody,” who can lead the way. “The Path” introduces her mission statement for the album: “Let’s hope the sun will show us the path.”

While the “prettier Jesus” line is a little tongue-in-cheek, Lorde is dead serious about the sun. “I basically thought of [Solar Power] as a sun-worship album,” Lorde said during an appearance on Hot Ones in July 2021. “It was … a devotional record for me.” Lorde, who has synesthesia, has said that she sees Solar Power as the color gold, a fitting aura for an album fixated on the sun. And in the music video for her title track, she lounges in yellow during a cloudless day at the beach. In the years between albums, Lorde cut down on her screen time and spent her days cooking, gardening, and going for walks. In “Solar Power,” she spreads the gospel and throws her “cellular device in the water.” The music video follows her as she skips through a gathering of hippie-ish dancers, reaches the water’s edge, and is carried to a raft. The blend of sincerity and satire gets pretty muddy here: It’s hard not to think you’re watching a commercial.

The same goes for “Mood Ring,” which Lorde calls a satirical song, where she pokes fun at new-age wellness culture. The music video shows Lorde in a blond wig, lounging with five other white women and burning sage in a vaguely spa-like tent. The lyrics state, “Ladies, begin your sun salutations/ You can burn sage, and I’ll cleanse the crystals.” But Lorde’s video introduction confuses the song’s message. In a live stream on YouTube before the video premiered, Lorde explains that “Mood Ring” is a song about “trying to feel spiritually connected in our modern world.” She goes on to show viewers some of the items she uses to feel “grounded”: a photograph of her aura, a book of sun and moon stickers, and BYREDO’s Mojave Ghost perfume. When a commenter points out that BYREDO is expensive (it’s $270 for 3.4 ounces), Lorde concurs and says it’s “a total pop star luxury item.” Lorde calls herself a pop star with a decided note of irony, a seemingly healthy attitude for someone launched into stratospheric fame at the age of 16. But in moments like this, it’s hard to discern whether she grasps the full disconnect between her “luxury” items and her efforts to return to the “simple life.”

While “Mood Ring” is about “magical thinking,” it’s not necessarily her thinking; the blond Lorde in the video is a projection of someone else, someone the real Lorde thinks is “very cool.” It’s clear that Lorde has been dabbling in some magical thinking of her own, and her satire isn’t nearly as biting as she thinks it is, making it difficult to detect whether it’s actually satire. The song is a recitation of the ways in which people look to external objects for inner peace, but it only gently gestures at the fact that many of these objects and activities—burning sage, crystal work, yoga—have long been appropriated by and commodified for rich white women. “We’ll fly somewhere Eastern/ They’ll have what I need,” Lorde mocks, but her refrain, “I can’t feel a thing,” is said in earnest. Lorde’s lyrics have always lent themselves to atmosphere and mood rather than narrative. When “Royals” was released eight years ago, it was a thrill to hear her clearly name the gap between pop-music narratives and the audiences that consume them. It might not be fair, but it’s impossible not to compare Lorde’s new work to those earlier lyrics.

“We’re fine with this, we didn’t come from money,” she sang, abjuring the fantasy of private planes, bottle service, and diamonds. She didn’t sing, “I’m fine with this,” she sang, “We’re fine with this.” In the best possible use of the first-person plural, she invites her listeners into the indolence and ennui of suburban, middle-class adolescence. Lorde narrates most of her 2013 debut album, Pure Heroine, with the same “we.” Her second album, Melodrama (2017), uses the more traditional differentiation between “I,” the singer, and “you,” the listener, to explore interpersonal relationships from an older and perhaps less angst-ridden perspective. But on Solar Power, when she again sings of “us” and “we,” instead of inviting her listeners in, her lyrics provoke a sense of alienation. Who, exactly, does Lorde think is “we”? In multiple interviews, Lorde has spoken about a transformative 2019 trip she took to Scott Base in Antarctica, which helped guide the writing of Solar Power. The trip was something she always wanted to do, telling Seth Meyers that it was “like a pilgrimage” where she experienced nature in a “very raw form.”

Lorde is following the sun. The rest of us will have to find our own way.

In a December 2020 interview with Antarctica New Zealand, she said of her trip that “sometimes it’s hard to see a tangible consequence to all of us changing our habits around how we consume and what we put out into the world.” She’s not very specific about what those tangible consequences might be, but when, in the next breath, she tells a story about flying in a helicopter over an ice shelf to search for whales, she makes it clear that she’s speaking from a rarified, hyper-privileged position. Critiques of consumerism and performative environmentalism have been around for years, but Lorde’s reverence for the natural world seems almost ahistorical—it lacks an awareness of the social and economic causes of climate change. Antarctica is a convenient destination for someone looking to experience “raw” nature. Fixating on a mostly uninhabited continent allows Lorde to bemoan climate change as an abstraction, something that will happen and is happening to “nature,” instead of to us. The anxiety of climate collapse is present in her lyrics, but her personal relationship to it isn’t energizing as much as it is evasive. On “Leader of a New Regime,” she sings, “Wearing SPF 3000 for the ultraviolet rays/ Made it to the island on the last of the outbound planes.” Like the women she mocks in “Mood Ring,” she happily looks to nature for her own inner peace, without questioning the commodification of the natural world.

While Lorde’s more grandiose lyrics are alienating, the album is at its best on the more intimate songs, including “Big Star,” “The Man with the Axe,” and “California.” The last song in particular feels in many ways like the answer to “Royals.” Here, Lorde’s “I” is clearly self-referential, as she sings about the moment she was awarded best song at the Grammys in 2014. “Goodbye to all the bottles, all the models/ Don’t want that California love.” Having experienced the celebrity culture that she could only marvel at from a distance as a young teenager, she’s confirming that she doesn’t need that world. Other lyrics touch on the quiet sadness of growing up: “I thought I was a genius, but now I’m 22,” she sings in “The Man with the Axe.” She ends the album with a haunting contemplation in “Oceanic Feeling”: “Oh, was enlightenment found?/ No, but I’m tryin’/ Takin’ it one year at a time/ I’ll know when it’s time/ To take off my robes and step into the choir.” Lorde doesn’t want to be a messiah; she wants to be a devotee. Despite the album’s wavering between wisdom and privileged solipsism, it’s refreshing to see the former teen phenom make the case for choosing—and creating—her own happiness. The soulful heft of her previous albums works in her favor, and Solar Power is just interesting enough to act as a bridge to whatever Lorde makes next. And yet, every now and then, the curtains part long enough for her emotional acuity to shine through. The album evokes a melancholy sympathy for that ubiquitous moment in early adulthood when you realize that the only one who can walk your path is you. Lorde is following the sun. The rest of us will have to find our own way.

Must Read: These Black Women Invented the Supermodel, Closing the Loop in Fashion