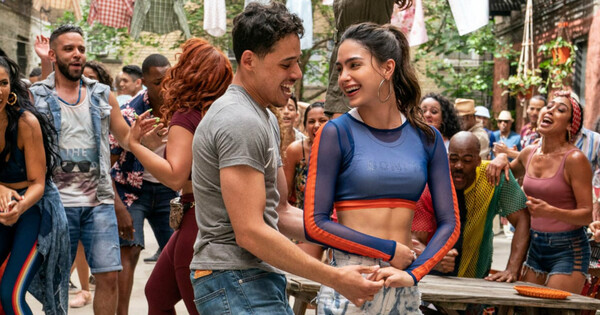 Anthony Ramos, left, as Usnavi and Melissa Barrera as Vanessa in In the Heights (Photo credit: Warner Bros. Pictures)

Jon M. Chu’s adaptation of In the Heights begins with an honest line: The film’s protagonist, Usnavi de la Vega (Anthony Ramos), is introducing the audience to Washington Heights, where he runs a neighborhood bodega, when he says, “Cause I’m not makin’ any profit if the coffee isn’t light and sweet!” Black Dominican artists, such as Alejandro Heredia, believe that line perfectly encapsulated the erasure of Blackness within the film. We need look no further than the casting to see this play out: Melissa Barreras, a white Mexican actor with no connection to New York City, plays Vanessa, an aspiring fashion designer. Leslie Grace, a light-skinned Black Dominican actor from the Bronx, portrays Nina, a Puerto Rican; and Ramos, a non-Black man of Puerto Rican descent, takes the role of a Dominican bodega owner. Though Dascha Polanco, a light-skinned Black Dominican woman, plays a nail tech named Cuca, she has a mere five lines. These poor casting choices illustrate how Hollywood maintains the illusion that Latine people, especially Black Latine people, are one-dimensional and therefore it’s reasonable to erase the complexities within Latin America.

While Lin-Manuel Miranda and the film’s other producers might have had good intentions, it’s still not enough. The Broadway version of the film tackled race, with Nina’s father, Kevin, rejecting Benny, an employee of his, played by Corey Hawkins, because he’s Black, but that important tension was excluded from the film to sell the idea that Latine communities are “one big family” living peacefully together. But here’s the thing: Latinidad is not a monolith: It encompasses differing racial components, languages, religions, and spiritual practices that must be respected, especially onscreen, and we’re no longer accepting the flattening of Latine communities to suit Hollywood’s white gaze. In 2018, Afro-Indigenous (Zapotec) writer Alan Palaez Lopez created a viral meme that exposes the issue with Latinidad. In it, a car labeled “Latinidad” swerves away from a road marked “admitting racism & anti-blackness exist & a commitment to build solidarity with Black and Indigenous people” and takes an exit labeled, “mestiza supremacy & your insistence that your great-great-great-great grandmother was Black.”

“Those who can identify with Hispanic or Latinx benefit from power because of language, race and religion,” Lopez told The Nation in 2019. “There is a privilege to being able to identify as Latinx and never be questioned about it, while those who are questioned are informed that they have less power” because they “speak a bastard Spanish, speak indigenous languages, or come from other colonies in the Americas are erased from that identity.” In the Heights continues to use this white-supremacist lens. The film is supposed to be a love letter to Washington Heights, but the soundtrack doesn’t represent the genres and melodies beloved in the Dominican community. “It Won’t Be Long” is the only song that pays homage to merengue, and even then, it’s sung by Barrera, a white-passing woman. After the film was criticized for being colorist, Miranda issued a terse apology saying he is “learning from feedback,” listening, and committed to doing better. But Black people, specifically Black women, have spoken out extensively about the gap between non-Black Latines and Black people from Latin America for years.

“We talk a lot about holding white people accountable, but we don’t really do that for non-Black Latinos,” artist, critic, and speaker Zahira Kelly-Cabrera said at the 2017 Afro Latino Festival. “And if we’re like brothers and sisters, from the same community…they don’t act like it. They do us just like white people do us.” Actors such as Mj Rodriguez, Indya Moore, and Gina Torres have also spoken out about the ways Hollywood and society at large dismisses and erases the Black Latine experience. “When I became an actress, I quickly realized that the world liked their Latinas to look Italian and not like me,” Torres told Mun2 in 2019. “So I wasn’t going up for Latina parts…. Regardless of the fact that I spoke the language and understood the culture better, those weren’t the parts that I could take seriously. Suddenly I had to explain why I look the way I look.” There’s also been constant criticism of Hollywood primarily casting light-skinned Latine actors, including Sofia Vergara, Jennifer Lopez, and Gina Rodriguez in roles designed to be representative of the whole. Even Vida, a critically acclaimed Starz series about two Mexican American sisters navigating gentrification in Boyle Heights, fed into this idea. The show only highlights colorism when the main characters are called “coconut Barbies” to demonstrate how much of a “struggle” it is to be “ni de aquí, ni de allá.”

This is a common approach to addressing such a complex issue: “The Latine community [in Hollywood and theater] has done a piss-poor job of showcasing the plethora of our identities without examining the ethnic, racial, and cultural nuances,” Guadalís Del Carmen, playwright, performer, and co-artistic director of the Latinx Playwrights Circle, tells Bitch. “In and out of theater, I’ve felt more racism from Latinos than I ever felt from white people because I grew up in Latine spaces. The constant questioning of my identity from Latine people has driven me to social anxieties in the past.” And when Dominican Americans are spotlighted, it’s to reinforce stereotypes of them being visa chasers, drug dealers, womanizers, and video vixens. Orange Is the New Black included the largest group of Dominican actors cast in a single U.S. series, but the characters they played were stereotypes, as Mechi Estévez-Cruz details in a 2013 article for Remezcla about Season 4’s introduction of a Dominican prison gang. “Unfortunately, my excitement about [OITNB casting a record number of Dominican actors] is now forever marred by the fact that my culture was rendered in flattened stereotypes for the white American gaze, devoid of any historical or cultural context,” Estévez-Cruz wrote.

OITNB, like shows before it, which Estévez-Cruz notes “shows a lack of introspection on behalf of the show creators at best, and at worst shows how much of the dialogue around anti-Blackness in the Latino community engages in anti-Blackness even as it grapples to dismantle it.” In his apology, Miranda pretended not to know about this divide, but colorism is an issue impacting dark-skinned Latine people every day. Black folks in Latin America still have less economic and political power due to colorism and anti-Blackness. There’s a documented tension between Dominican migrants and Puerto Ricans in both Puerto Rico and in the United States. For decades, Dominicans have sought ways to achieve upward mobility by taking yolas to Puerto Rico, but they’re racially profiled and discriminated against, as José Rodríguez, a Dominican leader in Puerto Rico, told The Guardian. “The profiling of Dominicans has both racial and ethnic components to it, as they may speak with a distinct Spanish accent and are often perceived as more likely to be afrodescendientes or of Afro-Latino heritage,” he said. “We had a case of a Puerto Rican in Caguas who was beaten because he was Black. They thought he was Dominican because for the police, there are no Black men here. If you’re Black, it’s because you’re Dominican.’”

And in the Dominican Republic, Haitians have endured an ongoing betrayal. After helping end slavery and helping the Republic keep its independence from Spain in 1863 and 1865, Dominican leaders continued to view Haitians as a threat. Since the late 19th century, anti-Haitianism has led to the exploitation of dark-skinned people. Haitians have been stripped of nationality rights due to anti-Haitianism and anti-Blackness. They also face rampant discrimination. In this way, colorism is a continuous cycle. In the Heights would have been the perfect opportunity to showcase the nuances and complexities of Black Dominicans, including Haitians. Instead, an entire team of people of color allowed Black folks to be erased from their own story, though the producers, writers, and director could have taken notes from Oz Rodriguez’s Vampires vs. the Bronx, which received critical acclaim when it was released on Netflix in 2020. Imani Lewis, Jaden Michael, and the Kid Mero reflected the community the film was representing and offered up an honest tale about gentrification, an issue plaguing the neighborhood.

Latinidad is not a monolith: It encompasses differing racial components, languages, religions, and spiritual practices that must be respected, especially onscreen.

So did the folks behind In the Heights not know what they were doing or did the studio attempt to create what Chu, Miranda, and the producers believed to be most sellable? Perhaps Miranda, a non-Black Latine cishet man, is unable to produce a film that centers the real Washington Heights because that version of the Heights doesn’t prioritize him as a non-Black person. Perhaps he believes that a movie that centers Black Dominicans isn’t going to be palatable to white people or Latin Americans who are non-Black. Many defend the budget-minded thinking that drives these kinds of casting decisions: Since Hollywood gives Latines so little, every piece of representation is a win, no matter who is excluded. After the 2020 Emmys gave a historic number of awards to Black actors, Latine organizations and actors, such as John Leguizamo, claimed Latine communities were being underrepresented. However, this sentiment was immensely anti-Black, especially considering that one in every four Latines identify as Black, and now it’s being used to defend the erasure of Black actors from In the Heights. “I’m simply saying, can’t you just wait awhile and leave it alone?” actor Rita Moreno told Stephen Colbert during an appearance on The Late Show. “It would be so nice if they hadn’t come up with that and left it alone, just for now. I mean, they’re really attacking the wrong person.”

Although Moreno later apologized, she was expressing the common idea that in order to get more movies made about Latine people, Latine people must support movies that may not even reflect their experience or are actively harmful to them. The film sells the idea that every Latine person is welcomed in the Heights, even in the face of gentrification. It’s a beautiful idea, but to pretend we don’t live in a world where white liberal America attempts to take up space even within marginalized BIPOC communities is irresponsible and unreasonable. To dream of bringing a community as complex and alive as the Heights to the big screen and reduce it to a neighborhood digestible for white folks isn’t authentic and encourages gentrification—the very thing the neighborhood has been fighting against. Rather than leaning in to these tensions, In the Heights is anxiously concerned about the white gaze; it’s begging to be seen, recognized, acknowledged by everything outside of it. In this way, it’s not telling a story of the Heights or Dominican Yorks; it’s telling the story of a Latinidad that white folks will consider authentic.

GANNI Is Hiring A Store Manager In Aventura, FL