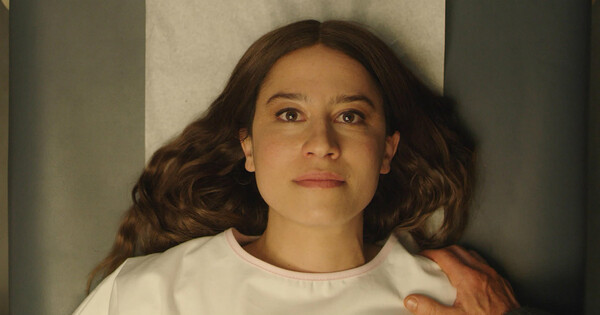 The final girl, the jump scare, the masked intruder, the dead telephone line, the evil clown: The list of horror-movie tropes is long, and if you’ve seen one, you’ve seen a dozen. But none seems more in need of contemporary introspection than the demon seed, the linchpin of classic films such as The Omen, Rosemary’s Baby, The Brood, and, literally, Demon Seed. You know the story: White woman gets pregnant, rounding out what seems to be a perfect life with a handsome, doting husband. But the pregnancy is tougher than presumed; the expectant mother grows uneasy and even paranoid; and once the child—almost always a boy—is born, it’s clear that something evil has emerged with it. The demon-seed plotline shares a particularly insidious constant: The mother of the little creep is treated as nothing more than a vessel by those around her, from husband and family to medical professionals.

More often than not, she’s aware that something isn’t right—mothers know—but her fear is treated as irrational, her bodily knowledge as untrustworthy. In the midst of dramatic foreboding, these films reflect a very real view of expectant and new mothers as confused, unstable, and losing touch with reality in a way that requires the support of, well, a strong father. Few horror films have tried to subvert the demon-seed narrative, but a notable exception is 2016’s Prevenge, which, in contrast to many of its predecessors, was written and directed by the movie’s star, Alice Lowe (Ruth). It begins with a familiar premise: Ruth’s fetus instructs her from within to head out on a homicidal rampage, her midwife even telling her that the unborn child knows what’s best for her and to follow its orders. But in the second half, she battles with the actual physical and mental effects of pregnancy (how it has taken over her body, moods, wants, needs), and with the stereotypical perceptions reserved for pregnant women (“she’s hysterical”). Ruth only feels relief after giving birth and realizing that her child is a normal girl—but it’s too late, because her desire to kill has become permanent.

Finally exposing the trope for the mess it is, with no grievances spared, is A24’s False Positive, released in June, directed by John Lee and cowritten by Lee and Broad City’s Ilana Glazer, who also plays Lucy, a woman who turns to fertility treatments when she and her husband, Adrian (Justin Theroux), have trouble conceiving. At one point, so aware of what the white-picket-fence dream is meant to look like, Lucy laments that, “As a woman, this is the one thing I’m supposed to be able to do and I can’t do it.” In comes her hero, Dr. Hindle (a perfectly chilling and mustachioed Pierce Brosnan), the best fertility doctor in town. Hindle bills himself as the man who can give women “their fairy-tale endings,” and indeed, with his help, Lucy quickly becomes pregnant. But Lucy and Adrian are forced to make a selective reduction when she learns she is carrying triplets (twin boys and a girl), who are all unlikely to survive if she carries them to term. Dr. Hindle and Adrian insist on keeping the boys, but Lucy chooses the girl.

As the pregnancy continues, however, Lucy notices Adrian’s increasingly close relationship with the doctor and begins to feel as if they’re hiding something from her. And they are. But the more the men insist that Lucy’s “mommy brain” is responsible for her paranoia, the more she questions her own footing in reality. And when she finally gives birth, her fears are validated: She is now the mother of twin boys. By the time of the reveal, the portrayal of the two men’s control over Lucy has become heavy-handed. But perhaps it has to be: After all, the idea that mothers of “evil” children are weak and defenseless isn’t a new one, and while for some of us with wombs it has always been clear, for others, it requires spelling out. That means we see Dr. Hindle overrule Lucy’s choice while portraying himself as a savior to would-be mothers everywhere, but Lucy’s own husband insists she quit a job she’s proud of, become a stay-at-home mother, and name the twin boys after him. Even at work, where all of her coworkers are male, Lucy’s efforts at leading a project and winning a promotion are thwarted, and she’s reduced to taking lunch orders.

It becomes even easier to selectively reduce her once she becomes pregnant, and her coworkers all speak to her as if she might be the most delicate being in the building. The real evil in False Positive, as in so many other demon-seed narratives, is a patriarchy that turns women’s bodies into mere receptacles for any number of terrors and leaves them doubting everything, including their own sanity. Consider the moment when The Omen’s Robert Thorn (Gregory Peck) begs his wife, Katherine (Lee Remick), to tell him what might be ailing her, why she’s been so anxious lately, and she tells him, “I need to see a psychiatrist. I… I have… fears. I have such fears.” But, she adds, “If I told you, you’d put me away.” He brushes it aside, so confident that whatever her worries might be, they are unwarranted and in her head. And, sure, believing your child is the devil is certainly far-fetched. But the gaslighting of women such as Lucy, Katherine, Rosemary (Mia Farrow), and the rest isn’t all that different from what real-life women experience as new mothers. In fact, according to a 2020 research study, mommy brain is more of a “perception” held by society that gets imprinted on mothers themselves, though mothers are actually as attentive or more attentive than non-mothers.

False Positive takes another devastating turn when Lucy discovers that her husband isn’t even the father of her twins: In another choice stolen from her, Dr. Hindle inseminated her with his own sperm. As with Guy (John Cassavetes) in Rosemary’s Baby, who rapes his wife in order to sell the soul of their unborn child to ensure his own successful career, the mother is simply a means to an end. Adrian, it turns out, has traded away his own wife’s autonomy and for a joint medical practice with Dr. Hindle. When these men believe their masculinity is at stake, the women are the ones who pay the biggest price. When Lucy accuses Dr. Hindle of raping her, he only laughs, telling her, “God doesn’t make babies, I do.” And though False Positive is a fictional story, Hindle’s insemination process is, unfortunately, not remotely fantastical. Countless fertility doctors have been known to impregnate unknowing women with their sperm, including Donald Cline (who fathered at least 50 children without his patients’ knowledge); Cecil Jacobson (who is presumed to have fathered at least 75 children); and Quincy Fortier, who known to have fathered at least 24 children but is presumed to have hundreds more, and whose story is detailed in the HBO documentary Baby God (2020).

In the midst of dramatic foreboding, these films reflect a very real view of expectant and new mothers as confused, unstable, and losing touch with reality in a way that requires the support of, well, a strong father.

Oscar-winning horror director Jordan Peele (Get Out, Us) summed up the relatability of the demon-seed genre in a 2017 Criterion interview. Describing his love for Rosemary’s Baby, he said, “My mother told me the thing that makes this movie so great is that it may be the only movie that captures the feeling of being pregnant—the insecurity, the fear, the paranoia, the feeling when someone tells you, ‘Oh, that’s just the chemicals and the hormones.’ That feeling of being placated. It’s a film about gender; it’s about men making decisions about women’s bodies behind their backs.” False Positive goes one step further by exploring the role of the healthcare system in that terrifying dynamic. A 2016 Human Rights Council report stated that, “[W]omen face a disproportionate risk of being subjected to humiliating and degrading treatment in healthcare facilities, especially during pregnancy, childbirth, and the postpartum period…. Women’s bodies are instrumentalized for cultural, political and economic purposes rooted in patriarchal traditions. Instrumentalization occurs within and beyond the health sector and is deeply embedded in multiple forms of social and political control over women.”

In each of these films, it’s the male ego that guides the doctors and fathers. Women’s intuition guides our heroines, but it also allows their own support systems to question their sanity and grasp on reality. As new moms, Lucy and Rosemary feel an instinctual pull to protect their children, even as everyone and everything around them tells them they’re hysterical. It’s what makes Rosemary rock her soulless son to sleep, and what leads Lucy to destroy Hindle’s sperm samples and him and—in an incredibly striking scene—press the lips of the dead fetus of her daughter to her bare breast in a show of symbolic breastfeeding. That is their scarce but supreme power in the face of the devils’ arrogance and desperate urge to spread their seed. And the scariest thing about it is just how true to life it is.