During the Pandemic, Medical Roleplay ASMR Brought Comfort to Millions 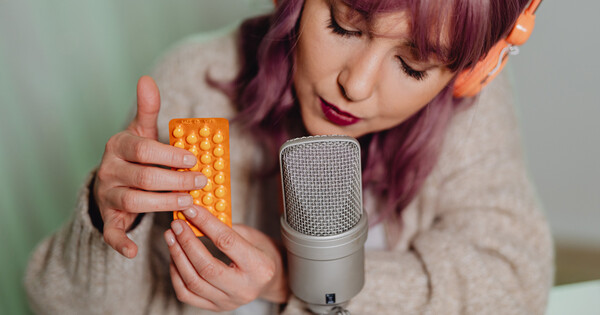 “What brings you into the surgery today?” Semide asks with a smile. You don’t answer, of course, because she’s on the other side of your screen as her soft voice comes through your headphones. “Oh I’m sorry to hear that,” she says, “I’ll have you feeling better in no time.” Semide, known on YouTube as SemideCoco, is an ASMR artist, a.k.a. ASMRtist. Autonomous sensory meridian response (ASMR) is a strange, tingling, yet relaxing sensation—similar to the feeling you get when you use a wire scalp massager. You might have experienced ASMR during a massage or haircut, while watching Bob Ross, or if you’re a weirdo like me, during a dentist appointment, without even realizing it.

YouTube now has a growing ASMR community, with hundreds of ASMRtists creating inventive and unique videos that trigger the sensation by doing things such as whispering or speaking softly into the mic, massaging the mic, or tapping and scratching objects against it, to name but a few. Some viewers prefer whispers, soft voices, or no talking at all; it all depends on what works best for them and generates the best body response. ASMR fans swear by it, listening to their favorite creators’ videos to get to sleep at night or to relax at the end of a stressful day. “There are many aspects of ASMR that can signal to the viewers’ autonomic nervous system that they are safe, such as a kind face, welcoming hand gestures, or the calm tone of voice,” Nicole Villegas, a resilience coach and occupational therapy doctor, says. “This physical and emotional relaxation effect of ASMR can lend itself to improved rest or sleep. Watching or listening to ASMR can also be a part of a bedtime or nap routine, and for some it’s like a meditation because attention is focused on purpose.”

Critics sometimes assume that ASMR fans get some kind of kinky kick from it, especially because some ASMR videos veer into sexy territories, but the majority of fans are in it solely for the chilled vibes and fuzzy-feeling brain. “I watch ASMR about once a week on average, but sometimes it can be way more frequent or way less frequent,” Iris, a 25-year-old from the Netherlands, who has been an ASMR fan for nearly two years, tells Bitch. “It just makes me feel relaxed, worry-free, and totally blissed out.” That might be why the comment sections on ASMR videos are some of the nicest and most supportive places on the internet. There you can find comments such as, “Hope everyone’s doing okay. I send my love to anyone who needs it” and “How did you know I needed this today? Thank you.”

Though ASMR’s popularity has exploded in recent years, one specific type of video—medical examination roleplay—has been popping up during the pandemic. “Roleplay” ASMR videos can range from the ASMRtist pretending to be a sleep therapist to the ASMRtist embodying an escaped lab rat. The main draw of roleplay videos, especially medical ones, is the personal attention given to the viewer. In these videos, the ASMRtist performs a mock exam (an eye exam, for example) to the camera, as if it were a patient, or on a second person in the room with them. The ASMRtist will use a soft tone or whisper to run through a series of half-conversations with the viewer, asking them to do what they would have to do in the real-life examination. While its appeal may seem counterintuitive during a time when the idea of getting sick is so terrifying, this style of ASMR allows the viewer to experience all the things they enjoy about doctor’s appointments, without the fear that accompanies actively needing medical help.

Some ASMRtists even make content specifically designed to help calm those who have medical phobias or anxieties. Villegas says these particular videos create a “social relationship between the content creator and viewer.” She further explains that “the one-way performance can even feel like an exchange for the person watching it. The care-themed videos are often predictable and familiar, [like being] at a doctor’s office or spa, and may tap into a sense of vulnerability, but in a controlled virtual environment.” While these roleplays are often an approximation of what the ASMRtist thinks the exam would look like, occasionally the ASMRtist is medically trained.

Semide, the ASRMtist who roleplays surgery, is studying naturopathic medicine—a system of medicine that combines conventional medicine with alternative medicines such as traditional Chinese medicine, homeopathy, hydrotherapy, and botanical medicine. She uses that medical knowhow to create medically accurate ASMR videos that get hundreds of thousands of views. She specializes in medical roleplay and massage videos, often with her family members as the viewer stand-in. “During a hard time in my life, my biggest comfort was watching ASMR videos—mostly itsblitzzz and Gentle Whispering ASMR,” she tells Bitch. “Their soft, loving voices embraced me and eased my suffering. In 2019 I took the plunge myself and made an eye exam roleplay video. It was a great way for me to review my physical exam skills while hopefully giving viewers tingles and a place to relax and fall asleep.” Semide’s been posting nearly every week since. “It has become a safe haven for so many beautiful souls, and for that I am forever grateful.”

People seem to have gravitated toward ASMR videos to fill a void that the lack of close personal attention and interaction has created.

Semide, like many other medically focused ASMRtists, found that her subscriber count skyrocketed when the world went into lockdown due to COVID, jumping from 13,500 subscribers in March 2020 to 150,000 by the end of the year. “The social isolation and increasing mental and physical health issues intensified by the pandemic drew many viewers to my channel,” she says. “I strongly believe that social interaction, especially in the form of intimacy and physical touch, is essential for our health and well-being, and it has been in short supply during this pandemic.” People seem to have gravitated toward ASMR videos to fill a void that the lack of close personal attention and interaction has created: For more than a year, we were locked inside, isolated, unable to see friends and family, and forbidden from doing the outdoor activities we enjoyed.

Millions of people have been suffering from loneliness and anxiety, and ASMR provides a small way to enjoy the world without the worry of contracting COVID. “ASMR can provide personal attention in a controlled environment that many people may not be able to access otherwise,” Villegas says. “We have physiological responses to the attention that can help us relax, [generate] emotions such as joy or a sense of well-being and [also create] social relationships with the content creators or virtual community.” In these times of chaos and upheaval, ASMR has been a tool to help soothe the mental and emotional strain that millions of people around the world are feeling. ASMR isn’t for everyone, of course; it can actually make some people very uncomfortable, like nails on a chalkboard. But for those who find it effective, myself included, ASMR has been a godsend, acting like a salve to help ease the anxiety and sleeplessness of our new reality. And it’s helped so many people pretend that, just maybe, everything can be normal again.

How to Make Homemade Applesauce Recipe