11 Podcasts for Your New Normal 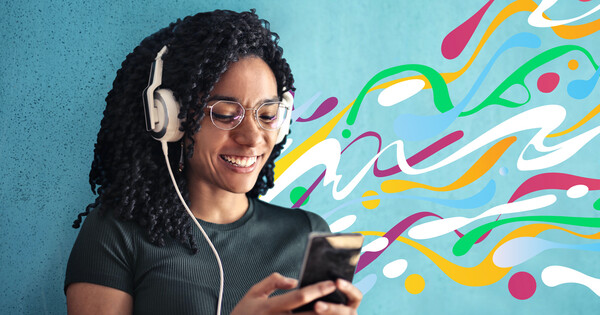 You’ve probably listened to a lot of podcasts over the last 16 months as you’ve been home alone without the ability to make weekend and evening plans. In that time, there has also been an onslaught of new podcasts since video and audio recording has become the new norm for meetings. Likely, listening to podcasts has become a habit and a pastime as you adjust to new levels of the pandemic.

The following list will hopefully have something for everyone as you resume commuting to work, traveling for fun, and continuing the ever-present housework. Happy listening!

Do you secretly want to give relationship advice? Join Sam Blackwell and Sierra DeMulder as they give advice for relationships of all kinds, talk about themselves and their own relationships, and laugh—a lot. After 10 years of friendship, this pair has things to say! That said, Sam and Sierra want you to know they’re not professionals with any sort of experience or education in psychology, but they’re going to give you advice anyway. They take questions from listeners such as “How do you know you’re in love?” and cover topics from being queer and coming out to family to masturbation and dealing with overbearing in-laws. This show is like a conversation with friends who have embarrassing stories about you, lots of love, and tons of emphatic cursing.

In this iHeartRadio podcast, started in 2009, current hosts Samantha McVey and Anney Reese talk about anything and everything feminist. This podcast aims to be like your older sibling or best friends talking about issues, pop culture, and media that make for slightly uncomfortable conversations when you talk with parental figures. As hosts have changed over time, episodes are catered to their interests. Recently, Stuff Mom Never Told You has recorded episodes about several Star Wars films, as they are some of Anney’s favorite movies, but they also talk about the myth of virginity, why Black TikTok creators are on strike, and how to break up with a friend. Guests, personal opinions, and research drive the conversations on this podcast.

All My Relations
{ Matika Wilbur, Desi Small-Rodriguez, and Adrienne Keene }

This podcast is about exploring relationships including those to land and one another while talking about topics that affect Native American peoples today. The first two seasons were cohosted by Matika Wilbur and Adrienne Keene, but Desi Small-Rodriguez has stepped in for the third season while Keene is on hiatus. (You can still find Keene on her blog Native Appropriations). The conversations on All My Relations are raw and honest, and the hosts share stories about hostility, racism, and hatred with each other and with the audience, as well as stories of love, community, and support. And it covers an expansive range of  topics, including Indigiqueer identity, voting, native fashion, and COVID’s impact on indigenous North Americans.

If you’re a fan of Bitch’s Adventures in Feministory series and love children’s books about women who changed the world, Fierce is for you. In each episode, host Jo PIazza talks about a historical woman who paved the way for others, and who in many cases added something to the world that we benefit from today. These aren’t boldfaced names like Joan of Arc and Malala Yousafzui; they’re 19th-century pirate Cheng I. Seo, pioneering computer programmer Grace Hopper, and early-Hollywood film auteur Dorothy Arzner.

When you really need a laugh, this is your podcast. In every episode, VlogBrothers, YouTubers, and novelists Hank and John Green offer “dubious advice” in response to listener questions, and it rarely follows a straight line. The Green brothers often veer off topic and into discussions  about their own experiences, and while their advice isn’t always applicable, it makes for a fun listen—especially since the hosts are quick to laugh at themselves. If you’re a fan of John and Hank but want a slightly calmer podcast experience, check out The Anthropocene Reviewed, in which John rates things on a five-star scale.

How To Save A Planet
{ Gimlet }

In summer 2020, when the COVID-19 pandemic was raging, the Black Lives Matter movement reached a critical juncture, and the United States was experiencing unprecedented wildfires and other climate-related events, marine biologist and conservationist Ayana Elizabeth Johnson, PhD, and Gimlet Media CEO Alex Blumberg teamed up for this podcast about the climate crisis. In each episode, the hosts look at policies, science, and activism in areas like recycling (is it BS?) and the effects of oil pipelines on Indigenous communities. Each episode offers actionable steps listeners can take—everything from buying used electric vehicles to starting your own kelp farm. Even better, these action items can always be found in the episode description for easy reference.

The focus is on Black literature in this book-focused podcast, with cohosts Danielle Burton and Maiysha Kai in conversation with authors like Kiley Reid  (2019’s Such a Fun Age), Brit Bennett (2020’s The Vanishing Half), and Hanif Abdurraqib (2021’s The Little Devil in America: Notes on Praise of Black Performance). They discuss all books from nonfiction and poetry to children’s books and how Black literature has influenced each writer. Cohosts and guests alike talk about their love for books, their experiences writing, politics, and so much more.

Mythology lies at the border between storytelling and history, depending on who you ask about what myths. In each episode, host Vanessa Richardson tells the story of a particular myth—or even a single mythical figure—while exploring often conflicting histories of each one, the communities and cultures from which it originates, and its impact on other myths. Mythology breaks stories into between one and three episodes, depending on the depth of the material, and episodes include myths ranging from Loki and Athena to La Llorna and Murile. While it does rely heavily on Roman, Greek, and Norse mythology, stories from South Africa, Polynesian islands, and Mexico provide listeners with stories that may be new to them.

If you can recall watching Reading Rainbow and memorizing its theme song as a child, then you’ll likely remember LeVar Burton’s mesmerizing voice. It’s probably been a while since you’ve heard him speak, but this podcast is about to change all of that. In episodes that range from 30 minutes to an hour, Burton reads short stories by the likes of Kurt Vonnegut, Toni Morrison, Ray Bradbury, and Octavia Butler to his listeners, adding background and context to both the works and their authors. His voice is as mesmerizing as it ever was.

The New York Times has been running its “Modern Love” column—real-life stories about love  and relationships—for more than 16 years and has adapted it into several books and an Amazon Prime series. But it’s this podcast that really drives home the emotional resonance of the column. Hosts Daniel Jones and Miya Lee dig into the column’s archives to retell love stories that have been previously published. While you can listen on Spotify, Apple Podcasts, and Stitcher, the New York Times website includes a short written paragraph about each episode often accompanied by several photos of the people in the story. If you’re skeptical, each episode is only 20-30 minutes, so just give this podcast a try!

If you’re a fan of fantasy and drama, this is the podcast for you. Because The Two Princes is a podcast and not an audiobook, the story really comes to life as different voice actors read the parts of the characters. There are even background noises to cue to listeners what action is occurring as the dialogue ensues. Amir and Rupert, two princes from warring realms that still harbor grudges against men long dead, meet while Prince Rupert is attempting to vanquish a curse from his kingdom before he ascends to the throne. Dragons, witches, love, and so much more ensue in the (so far) 21 episodes of this podcast drama.

Read this Next: Pretty Hurts

Their gendered advertising is seemingly created to sanitize the violence they inflict on Palestinians.