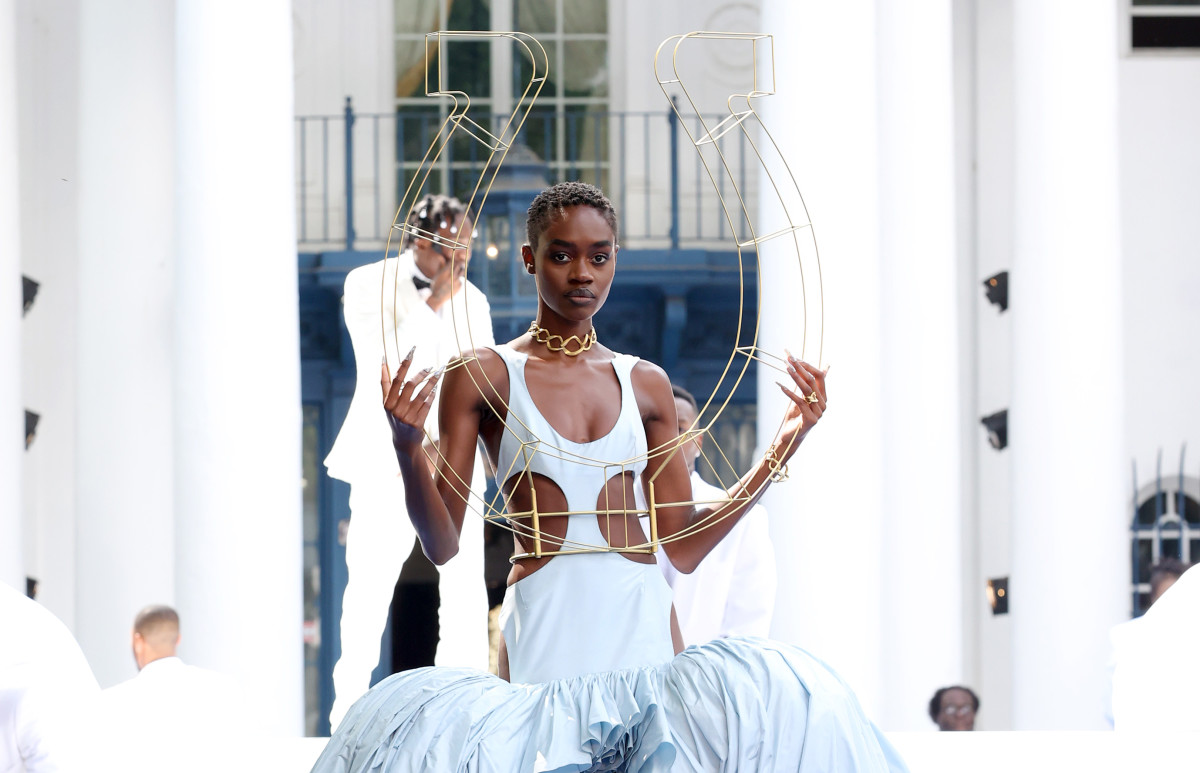 The original time slot assigned by the Chambre Syndicale de la Haute Couture might not have worked out (not that the crowd assembled in Irvington, New York on Thursday minded — it was quite the party), but Haute Couture Fashion Week was willing to wait. Same goes for the guests, who came together at Madam C.J. Walker‘s Villa Lewaro a second time over the weekend, eager to witness fashion history.

With the Wat U Iz show, Jean-Raymond became the first Black American to present a couture collection as a guest of the Chambre Syndicale. And the designer used the opportunity to pay homage to a long, often overlooked history of Black innovation.

Referencing a list housed in the Library of Congress, Jean-Raymond showed a series of Pyer Moss-ified, three-dimensional wearable sculptures, each representing a well-known product invented by a Black person — from the automatic traffic signal (Garrett Morgan) to the portable air conditioner (Frederick Jones) to the Super Soaker (Lonnie Johnson). “These are inventions by Black people and I wanted to reintroduce them to Black people, reverse the erasure that may exist — and to troll a little bit, too,” he told Vogue.

Underneath, there are some elegant evening wear propositions: a pale blue cutout gown with a crinoline skirt (part of the horseshoe look, a tribute to Oscar E. Brown), a white off-the-shoulder shirtdress (styled with a folding chair, a nod to Nathaniel Alexander) and a long-sleeved pink ruched bodycon dress (paired with an oversized beaded-fringe lampshade hat, to represent Lewis Latimer’s electric lightbulb).

As with everything Pyer Moss, every element of the production was considered. There was the backdrop of Villa Lewaro, once the home of the country’s first self-made female millionaire (designed by Vertner Woodson Tandy, the first African American architect registered in the state of New York) and a known gathering place of the Harlem Renaissance. Before the models stepped onto the runway, Jean-Raymond invited Elaine Brown, former chairwoman of the Black Panther Party, to speak to the audience. A performance by 22Gz — who, like the designer, hails from Flatbush, Brooklyn — followed.

In the show notes, Jean-Raymond wrote: “We are an invention inside of an invention. Inside of the creation of race, we made blackness. Uprooted from home and put in a foreign land, we made culture. And when they tried to strip our humanity, we made freedom so tethered to each other that it still shapes the world today.”

“The stories the world tells us about us are about pain,” he continued. “The stories we tell about each other about our own lives are about how grandma loved us with bible verses and lemonade, how bloodlines never defined who our aunts and uncles were, how the house was always big enough to take in everybody we loved. We hold stories of glory in our bodies. Black imagination is this world’s greatest technology.”

The designer elaborated on this backstage; speaking with WWD‘s Booth Moore, he said of the collection: “I’m always reversing the erasure of Black people in the larger conversation around the African diaspora. But we need to evolve that conversation every time. I wanted this to be new, imperfect and fun. And some of the pieces are super hilarious to me, like the peanut butter one.”

That humor manifested in other ways. Ahead of Take Two, the team released a limited-edition commemorative T-shirt, featuring an image from the original show date, of staff working to dry the rained-out runway as an umbrella-covered audience watches.

Also, you may have heard about the herbal remedies Jean-Raymond personally handed out to guests huddled under the tents to escape the rain on Thursday: Elle.com reports that those are actually part of a collaboration with the Black-owned cannabis company Viola, which aims to promote social equity in the industry, that the designer hopes “[benefits] the communities that were harmed by drug enforcement in the past,” Jean-Raymond told Nerisha Penrose.

“At our best, we create space and tools for those who will come next, knowing that we must pay it forward,” the show notes read. “What will you leave behind? What will they build from what you’ve done? Or have you not yet learned and are only building for yourself in this world.”

See every single look in Pyer Moss Couture 1 in the gallery, below.

Music Can Raise Or Lower Your Vibe: Listen Selectively