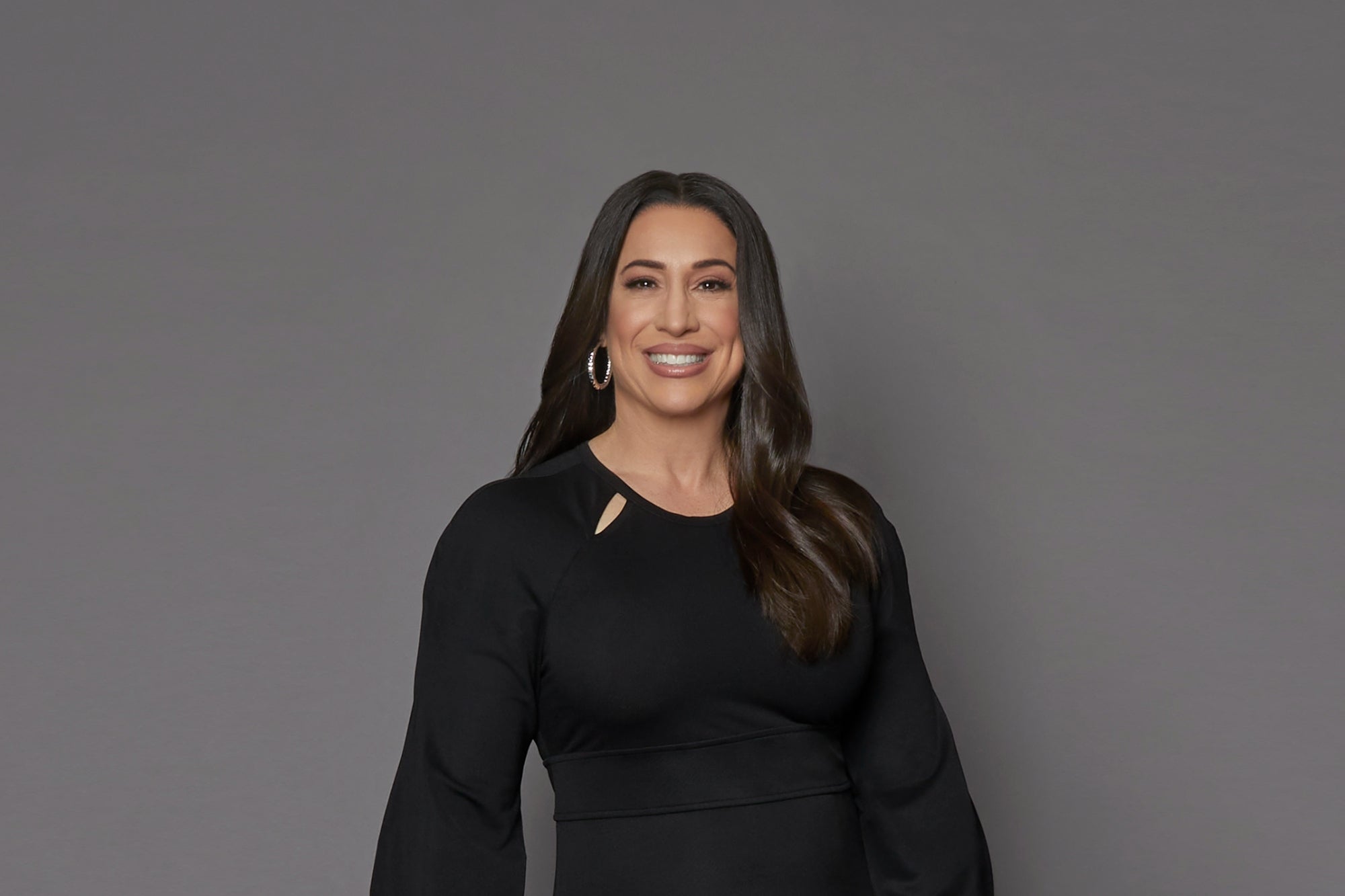 What’s the difference between building a brand behind the scenes and building one inspired by your own needs? Dany Garcia is learning that now. She’s typically known as the woman fueling massive companies — as Dwayne “the Rock” Johnson’s manager and business partner, cofounder of the the multi-platform production company Seven Bucks Productions, and the first female owner of a major U.S. professional sports league (she co-owns the XFL). But now she has launched a brand designed to solve her own problem: She is a professional woman and a bodybuilder, wants clothing that can work for her all day, and believes it’s an underserved market ready to explode. So now she’s taking what she learned from growing other people’s brands and applying it to her own.

Her clothing line is called GSTQ, which stands for God Save the Queen, the name of the British royal anthem. Garcia discovered the phrase at 16 while playing French horn in her high school’s orchestra, at a time when she was wrestling with a teenage cocktail of ambition and self-doubt. “I want you to have an immersive experience,” she says. “It’s so much more than just one deliverable. And I get to lean on all of the work I’ve done in the past to bring it to life.” Here, she discusses how she translated an ethos into a brand — but without being blinded by her personal attachment to it.

RELATED: Dwayne Johnson and Dany Garcia Want You To Rethink Everything

The story of this brand begins a long time ago. Give me the setup.

It’s the oldest brand idea I’ve held onto. When I was 16 in Succasunna, N.J., playing French horn in the high school orchestra, we were given sheet of music of the British royal anthem. It’s called “God Save the Queen.” And when I saw that, I was like, Oh, my gosh. I was filled with such aspirations, and then this question of, like, How the hell am I going to get there? I remember looking in the mirror and saying, “All right. This is what I have to work with?” You know? I was very, very highly aware. And so that sheet music came across, and I loved the phrase, and the idea that an entire kingdom and country were all saying, “God, please, save the queen.”

I decided to adopt that phrase myself and look at myself as the queen, and know at least I had God rooting for me. I would write GSTQ on all my books. If you look at my senior high school yearbook, there it is — GSTQ. The mindset became so important. It carried me forward. There was so much in my life I had to battle through. And eventually the idea became: Could GSTQ represent a brand?

You’re a strategic brand builder. How did you think about entering something as crowded as the clothing market?

I said, “Where’s the space between athleisure and power dressing? How can I duplicate what I’ve been piecemealing for the past five to seven years as I’m going from the gym to all these meetings? How does the fabric move? How does it stretch? Most importantly, how are you wearing it 15 hours, not running home, and then tearing it off your body because you’re like, I can’t stand it?”

For me, that was a white space. But so is the way I approach my consumer. Obviously, there’s demos — words like soccer mom, working mom, and “20 to 30” and “35 to 50,” et cetera. My demo is mindset. Who are the women who are looking to control their universe, or already control their universe, or are students learning how to drive their universe? You know, I’m a filmmaker. I’m a franchise builder. I’m a universe builder. So my GSTQ proposition was not only the relationship and the interaction with the clothing, but Can I build a universe — a mindset universe?

So many companies begin when a founder tries solving a problem for themselves — but that’s actually a new thing for you. What lessons have you taken from your other brands that you found especially useful with this one?

There’s an aspect to all the work I do where I never drink the Kool-Aid. I stay away from immersive moments so I never lose the perspective of what the brand is to the world as well as what the brand is to itself. With GSTQ, I worked to stay philosophically very, very high. Then I could have experienced veterans on my team come in and execute off a principle.

For example, our Stadium jacket. It’s based upon the large jackets football players wear on the sideline when it’s freezing. I’ve always been like, God, I love that jacket. How could I make that for myself? So we created it, and we put straps in there so that when you take it off, it stays on your body. Your hands are free. You don’t have to carry it. We had so much fun. So I’ll come in deeply and play with that — and then I’ll use data analytics to check myself, because at the end of the day, I’m not making art just for my room. I’m making something that needs to be worthy enough of the transaction.

I identify through the success of the companies, and that success is a relationship with the audience. That’s where my success meters lie. So it helps me be more neutral.

You mentioned earlier that you aren’t targeting your audience by demographic; you’re targeting by mindset. That sounds powerful but also much harder to pull off.

It’s much harder, and that gives me leverage, right? But the reality is that if you were to go to pure demographics, you would be missing so much of a mindset shift that’s happened to every individual. Just because I am a “soccer mom” — a mom who has driven my daughter to soccer practice — you can’t say I am therefore A, B, C, and D. You’re going to miss the fact that I happen to be a professional bodybuilder, or I own numerous companies. So at GSTQ, I don’t want to exclude consumers. I’m saying, “Where do you want to be? And let us be a tool to help you get there.”

Now, I do believe you can use data to do that. It’s easy to look at sentiment; social media analytics are so robust. You know, the CPG industry likes the question “Where are people at?” As a filmmaker and as a storyteller, I like the question “Where can I take you?” That’s a skill set I’m comfortable with, so it’s what I look at with the launch at a clothing line.

Do you think that if you identify an audience by mindset, it becomes easier to communicate with them? After all, you now know how they think and the language they use.

I do. And you must make sure you create channels for open feedback. When you’re looking at mindset, you actually create more space for the brand or the individual — because you understand them, and they also understand you.

Here’s another first for you: You appear in the initial billboards and digital advertising for GSTQ, alongside your brand ambassadors. What’s that been like?

You know, it adds more hours to the day. The glam is a real thing! But it felt right because so much of GSTQ is an authentic story of what happened to me as a teenager. I wanted the brand to have real roots. I won’t be as forward-facing in the future; the brand is going to be like any of my others. But at this moment, I think there was real value.

There is a truth where — for women in particular, or anywhere you have any diversity — if you’re succeeding quietly, you’re not doing the job. So for me, this felt like a real moment to put my money where my mouth is. This is a big deal. Let me be forward-facing about it. I am not a traditional model, but I am a traditional person working my butt off, so let me own that red carpet and my space and let that be an inspiration for other individuals. So, yeah, it was time to step.

‘What’s an Elevator Pitch, and Why Do I Need One?’